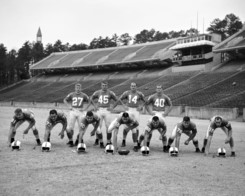 Travel is fatal to prejudice, bigotry, and narrow-mindedness, and many of our people need it sorely on these accounts. Broad, wholesome, charitable views of men and things cannot be acquired by vegetating in one little corner of the earth all one’s lifetime.”           —Mark Twain, Innocents Abroad/Roughing It

The two late coaches scheduled the meeting as the back end of a home-and-home series, with the 1962 and 1963 contests played at Spartan Stadium. The Spartans’ road trip marked the first time a school known for a fully integrated football roster played in a former Confederate state at the height of the Civil Rights movement.

Prior to World War II, a “gentleman’s agreement” required northern schools to bench or leave behind their black athletes when playing southern schools. The policy largely continued into the 1950s, although there were some exceptions ignoring the agreement following President Harry S. Truman’s steps to desegregate the military in 1948. Harvard, with one black player, played at Virginia, in 1947. Notre Dame, with two black players, visited Chapel Hill in 1953. USC, with three black players, traveled to Texas in 1956.

North Carolina, though, not only had a track record as one of the few southern schools that had traveled north and faced black athletes in pursuit of national exposure, the Tar Heels took it a step further scheduling Michigan State at Chapel Hill. The 1964 Michigan State-North Carolina a game helped open doors. The Spartans surprised no one with their national reputation for black stars, thanks to nationally televised Rose Bowl trips. North Carolina knew what to expect.

Some 1964 players on Michigan State’s Underground Railroad, which featured 20 black athletes with many recruited from the segregated South, initially viewed the North Carolina road trip with trepidation. They had chilling memories of Jim Crow laws and second-class citizenship. Two Spartans from neighboring South Carolina, Jim Summers and the late George Webster, told their parents to stay home.

“I didn’t want my parents to be subjected to the kind of humiliation that they might encounter,” said Summers, adding Webster felt the same. “We knew the only blacks in the stadium would be the ones working.”

But Webster, a College Football Hall of Fame rover/linebacker from Anderson, S.C., and Summers, a two-year starting cornerback from Orangeburg, S.C., learned along with their teammates some parts of the South accepted change sooner than others. North Carolina won 21-15 on a day without incident on and off the field.

“The only thing I remember from that game was they had a big halfback that went on to play in the NFL, and he ran all over us,” said Summers, referring to Ken Willard, who played 10 NFL seasons. “I don’t remember their players doing anything dirty or saying anything racial.”

Michigan State’s Jimmy Raye, who grew up 70 miles down the road from Chapel Hill in segregated Fayetteville, N.C., was a freshman in 1964 destined to become the the South’s first black quarterback to win a national title as the Spartans’ starter in 1966.

“I remember the team coming back, and we were together in the Brody Complex,” said Raye, who didn’t travel due to NCAA freshman ineligibility rules of the era. “They were disappointed with the loss, but I don’t remember anyone talking about incidents.”

In addition to Webster, three other Underground Railroad players on the field that afternoon on their way to the College Football Hall of Fame were the late Bubba Smith of Beaumont, Tx., Gene Washington of La Porte, Tx.; and Clinton Jones from Cleveland, Ohio. They echoed the memories of Summers and Raye.

One of Willard’s memories of the game was Smith, a 6-foot-7, 285-pound defensive end ahead of his time for modern athletes combining speed and quickness, harassing sophomore quarterback Danny Talbott’s passing attempts.

“I guess playing those games took the novelty out of it,” Willard said. “We heard a lot about how big Bubba Smith was, but I don’t remember comments from coaches, players, students or fans about black players. That’s my truthful recollection.”

We must rely on such oral histories to understand this under-appreciated moment in college football. The 1964 media hadn’t progressed much from pre-Civil Rights attitudes of avoiding the subject of race.

The Raleigh News and Observer and now defunct Raleigh Times limited their stories to game-day results. The Detroit Free Press and Detroit News were both on strike, but Lansing State Journal sports editor Bob Hoerner traveled to Chapel Hill. Without citing segregation, his brief mention was merely that the Spartans were the first Big Ten team to play in Chapel Hill. This was three years before Charlie Scott was North Carolina’s first black basketball player for coach Dean Smith.

The advance game story in the “Daily Tar Heel” — North Carolina’s student newspaper — was written “Pete Gammons,” who went on to a Hall-of-Fame baseball writing career as Peter Gammons. His Michigan State-North Carolina advance story made no mention of the Spartans’ black athletes breaking ground in the South. The photo accompanying the story was of Daugherty and a Charlie Migyanka, a white player.

The lack of incidents may have contributed to the media avoiding the subject, which was the norm for the time. But a chance to spread enlightenment was missed. Willard had grown up in segregated Virginia, and he understood the difference between the Chapel Hill campus from the Deep South. The University of North Carolina’s flagship campus was and still is considered a genteel place and the state’s foremost forward-thinking campus.

“It was a different mentality down there,” he said. “Chapel Hill was very progressive … and disliked for that reason. We were considered too liberal.”

For a perspective on the 1964 climate in former Confederate states, only a year earlier Maryland’s Darryl Hill broke the Atlantic Coast Conference color line as its first black player (Maryland didn’t join the Big Ten until 2014).

Hill played Maryland’s early-season contest under a death threat at South Carolina (both schools were then ACC members). Fans taunted Hill with racial slurs. On the way to the locker room at halftime, a fan dumped a drink on him. At both South Carolina and later in the season at Clemson, another ACC school located in South Carolina, Hill endured double- and triple-teamed defenses with hard tackles in addition to racial taunts.

Also at Clemson, Hill’s mother was not permitted to enter the stadium until Clemson president Robert Edwards intervened.

Some of the strongest segregation rules for sports events were in Birmingham, Ala., where the University of Alabama played about half of its home games at Legion Field. Alabama’s powerhouse teams coached by Bear Bryant rarely left the South. Bryant’s 1966 team played eight games within Alabama’s borders — four at Birmingham’s Legion Field, three on campus at Denny Stadium (now Bryant-Denny Stadium) and one in Mobile at Ladd Peebles Stadium. The two road games were trips to Mississippi in in Jackson (185 miles) and Tennessee in Knoxville (314 miles). The Sugar Bowl against Nebraska was played in New Orleans (293 miles).

Michigan State’s 1964 trip to North Carolina contradicts Bryant’s apologists, who claimed northern schools refused to travel to Alabama. Writer Allen Barra stated in his book on Bryant, “Last Coach,” it’s an unverified claim pushed by Alabama author Keith Dunnavant. The Bryant apologist has pushed it in print and film. The Spartans and other Big Ten teams also had traveled to Miami.

It’s important to note that the 1964 Michigan State-North Carolina ground-breaker preceded by six years the myth-draped USC-Alabama game played on Sept. 12, 1970 at Legion Field in Birmingham. Years later myths grew out of USC facing Alabama’s all-white roster in the deep South. One was Bryant previously couldn’t convince northern schools to play in Alabama until USC coach John McKay agreed. McKay and Bryant were close friends, but so were Daugherty and Bryant.

The larger myth gilded Bryan’ts legacy. It purports Bryant used the game to open the eyes of his white fans — to convince them it was time to follow the U.S. Constitution and allow black athletes to wear Alabama’s colors. In reality, Bryant dragged his feet. Five SEC football programs integrated ahead of Alabama. The Alabama student body had been integrated in 1963. The state’s high schools were desegregated in 1969.

Bryant’s former assistant coaches and players have disputed the myths. They say Bryant didn’t schedule the game to lose. They deny Bryant paraded USC fullback Sam Cunningham through the Alabama locker room as an example of college football player looked like. Cunningham enjoyed the the legend for many years before he admitted it didn’t happen.

As for northern teams journeying south, the closest examples to Michigan State’s 1964 trip to Chapel Hill was USC playing two games in Texas — at the University of Texas in Austin in 1956 and at Southern Methodist in Dallas in 1962. USC’s 1956 roster had three black players and 1962 roster five. Those numbers typical for integrated schools prior to Michigan State breaking barriers. More significantly, they weren’t events that changed recruiting trends among black athletes as did Michigan State’s Underground Railroad teams.

Willard’s theory made sense to Raye, who looked to Michigan State for an opportunity to play big-time college football when ACC schools, including home-state schools North Carolina, N.C. State, Duke and Wake Forest, declined to recruit him due to race.

Note: Research taken from my book, Raye of Light. I’ve updated this story since it was first posted in 2014.