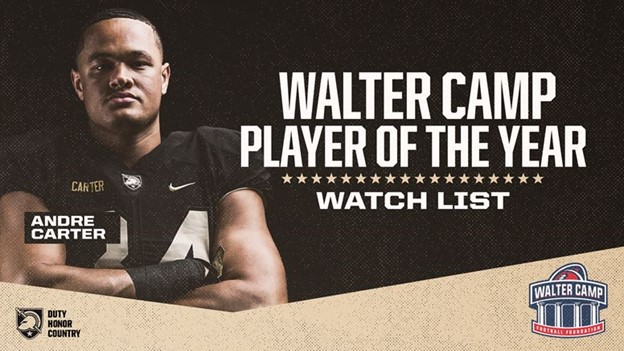 College football watch lists for post-season awards weren’t part of preseason news cycle when Army’s Doc Blanchard and Glenn Davis swept the Heisman Trophy in 1945 and 1946 and Pete Dawkins won it in 1958.

But if they had been, the 2022 Black Knights, who opened preseason camp Wednesday, are rivaling those years gone by seasons for preseason recognition. Three seniors and a junior have gained national attention after posting last year’s 9-4 record that included a win over Missouri in the Armed Forces Bowl.

At the top of the list is senior outside linebacker Andre Carter II. He has been named to watch list for the Walter Camp Player of the Year, the Lombardi Award for the top lineman and Bednarik Award for the top defensive player.

In addition to those three seniors, junior slotback/return man Tyrell Robinson has been named to the Hornung Award list for most versatile player.

All four players arrived at West Point as two-star recruits, which speaks volumes about the ability of head coach Jeff Monken and his staff to find hidden talent and develop it. Monken is 58-43 in nine seasons, but in the past seven his rebuilt program has gone 52-25 (.675).

“Coach Monken has done a great job building the program, and that’s the way it shows,” said Broughton of the recognition. “We’re doing the things we need to on and off the field to represent this academy the way we should.”

Carter, a 6-foot-7, 260-pounder from Missouri City, Texas, recorded 15.5 sacks to top the nation with 1.19 per game. Alabama’s Will Anderson, who played two more games, totaled the most with 17.

Carter recorded three sacks against Missouri in the 24-22 victory in the Armed Forces Bowl win and one sack in the 20-14 loss at Wisconsin. He didn’t have a sack against a third Power 5 school, Wake Forest. Demon Deacons’ quarterback Sam Hartman worked from a read-and-react passing scheme to beat the Black Knights, 70-56. Monken said Carter has been focused on improvement despite preseason recognition.

“That’s who he is,” Monken said. “He’s a guy who every day after practice comes up and sees coach (defensive coordinator Nate) Woody and wants feedback. We had the weekend off before camp and guys traveled home, but before he left he came up to see coach Woody. He likes to talk football.

“He wants to be the very best he can be. He asks the right questions. He knows there is room for improvement. That’s the great thing about Andre. He is really talented, and he had a bunch of sacks, but he realizes he can get better. There are a lot of things he can do and if does that he’ll have a good year.”

Bishop, Army’s 6-3, 275-pound center from Holland, Pennsylvania, is a third-year starter. He started at center in 2021 and split time starting at center and guard in 2020.

“That’s a great honor they consider me for the watch list,” Bishop said. “But the biggest thing that pushes me is my teammates.”

Robinson has been in the starting lineup since his freshman season with his speed and quickness. Now he’s a third-year starter with added maturity to understand how to use his speed in the college game. Broughton sees growth in Robinson’s presence on the roster.

“He knows how to motivate the team,” Broughton said. “He’s good as terms of energy. Energy is big for our team. He pushes everybody else. That’s a big thing he brings to the table now.”

Coming from a second-year captain on a roster of future leaders, those words carry added weight.

Broughton, in addition to the Wuerffel, has been nominated to the All-State Good Works Team. He has been involved in the Special Olympics in his hometown of Lawrenceville, Georgia. At West Point, he has volunteered time in nearby communities. He visits with Army veterans at the Sunrise Senior Living Center in Dix Hills, N.Y., and reads for students at Highland Falls (NY) Middle School.

“It’s special and I’m thankful,” Broughton said of the watching lists. “That’s a great accomplishment if it does go that way.”

I will put research on Duffy Daugherty’s college football integrations contributions compared to Bear Bryant up against anybody, anytime, anywhere.

Click here to purchase Raye of Light from August Publications (I get a better royalty).