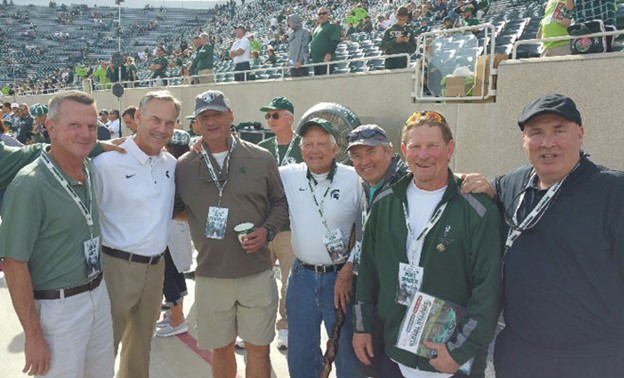 PHOTO: Mark Dantonio and his high school teammates on the Michigan State sidelines.

I’m reposting this story about Michigan State’s Mark Dantonio, the Spartans’ all-time winningest coach, and his time at West Point. I originally wrote it in 2017 prior to the Army-Navy Game. This weekend, Army coach Jim Monken invited Dantonio as a featured coach to participate in the Army West Point coaching clinic, April 7-9.

One game plan remains with X’s and O’s churning through Mark Dantonio’s mind to wrap up a remarkable bounce-back season. The Michigan State coach’s football brain and innate leadership that was worthy of a 1974 West Point appointment flipped the Spartans’ 3-9 disaster last year into 9-3.

But before No. 16-ranked Michigan State faces No. 18 Washington State (9-3) on Dec. 28 at the Holiday Bowl in San Diego, there is another game close to Dantonio’s heart:

“He’s the winningest coach in Michigan State history. He’s a three-time Big Ten champion and two-time coach of the year in that league. He took them to the playoffs and won a Rose Bowl. He finished third in country in 2013. That guy is an accomplished football coach. He was 8-5 against his rival, Michigan – that’s not easy to do. I admire that.

“The thing I like about Coach is his personality and temperament as a coach. He’s a tough coach and his personality comes out in the teams. Those Michigan State teams are tough and physical and played hard. I like teams like that. He’s very organized, very business-like. I had a chance to spend time with him away from the game on some trips that Nike does for coaches. I’m really impressed with him. He’s a good man, a smart defensive coach. I’m glad to have him here, excited to have him evaluate our program and talk to our guest coaches at the coaches clinic.”

It’s the 118th Army-Navy Game on Saturday in Philadelphia.

Dantonio doesn’t often talk about his commitment to West Point as an Ohio teen-ager out of Zanesville High 43 years ago, but U.S. Army Colonel (Ret.) Jack Faires can explain why his long-time friend still has a soft spot for Army’s football program. Their friendship dates to Pee Wee youth football for the Zanesville South Rebels and includes playing together as junior high and high school teammates.

In the long ago summer of 1974, Faires left with Dantonio and three others from their Ohio Congressional district for West Point’s basic training – known as Beast Barracks. They’ve formed a “fab four” all-star cast of successful careers, although Dantonio left West Point before classes began.

Faires retired after 24 years of service, even though colleagues say he was “tracking for stars” as a general, to tap his entrepreneurial desire. He started his own successful companies: PotteryFaire in the wholesale/broker business and Polish Pottery Gallery in the retail/cyber business.

THE RIGHT FORK IN THE ROAD

“Every single one of my buddies agrees Mark made one of the best decisions of his life to leave the academy and follow a football — versus a military — career,” Faires said. “They’re serious about football at West Point, but mostly in the aspect that football builds discipline and character in young men who will ultimately pursue military careers.

“Mark, like many kids at that age, wanted to dedicate his life to the profession of football — and I think West Point helped him validate and solidify that decision in his life. As a football coach he has had a much greater impact on so many more 18-year-old kids than he would have had as an Army officer. He is able to stay close to so many young kids.”

“As a Brigade Commander I had almost 3000 soldiers working on (sometimes) three different continents — and “Scap” is the NATO Commander now — commanding millions. These are whole different types of leadership and your interaction with a young 18-year old kid just coming out of high school is very limited. ‘You actually miss it.’

“But this is where Mark wanted to be and it is in the exact right spot for him,” He has high standards, solid core beliefs and is tenacious in pursuit of excellence — and I think that’s where he’s made his impact. He fits perfectly as a college football coach. He can shape and mold young men. It doesn’t always work out with some kids, but Michigan State is lucky to have him leading their program.

They teach leadership at West Point, but Dantoino’s innate skills were never tested more than in 2016 and throughout the off-season. Besides the dismal 3-9 record, the program was marred by two sexual assault cases that led to the dismissal of four high-profile players.

“Mark has stuck to what has worked for him,” Faires said. “I didn’t follow too closely what happened, but I knew Mark would do what is right. It’s in his ethos. I’ve always told people integrity in non-negotiable. You never hear anything about Mark cutting the corners in recruiting or running his program — or anything else.”

Dantonio’s “retail leadership” was under the microscope again at mid-season when star running back L.J. Scott was arrested for his seventh driving violation. When Dantonio didn’t start Scott for the next game, national media members responded that the punishment was too lenient.

“When you’re a coach, you get to know the kid and their family through recruiting,” Faires said. “You know that some of them come from tough backgrounds. That’s what’s tough about ‘retail leadership.’

“It’s the same for me as an officer. As a junior officer, I knew the wife and kids of people I was leading. When I had to discipline someone, I knew it affected the soldier’s future and the future of his family, too. And it also affects you. You see these things over and over again — typically each with its own unique set of circumstances — and learning to deal with these situations becomes part of your “kit bag” as a leader.

“Mark has been handling things like that so well for 40 years. It is tough being the decision-maker, and easy for those that might not have all the pertinent information and don’t have to make these decisions to second-guess.”

COMMITTING TO A MILITARY CAREER

Faires and other graduates of West Point, Annapolis (Navy) and Colorado Springs (Air Force) say that to leave the academies isn’t necessarily a reflection on the individual. The high attrition rate involves much more than surviving Beast Barracks.

It’s not unusual for plebes to leave West Point during summer Beast Barracks or even their first or second years at the academy. Faires admits throughout his first two years he had a “Plan B” to depart for Ohio State. It’s not until the third year cadets are committed to the final two years of school and five years of military duty.

One of Faires’ classmates was U.S. Army Colonel (Ret.) Rick Steinke of Big Rapids, Mich. Steinke turned down a four-year ROTC scholarship to Michigan State to accept a West Point appointment. Steinke said he considered dropping out midway through his first semester as a freshman until a high school coach visited campus and encouraged him to stick with it. Steinke graduated and rose to Colonel before he retired. He currently serves as an Associate Dean at the George C. Marshall Center for Security Studies in Garmisch-Partenkirchen, Germany.

Dantonio spoke briefly about leaving West Point in a 2015 media session, saying, “I had just never been away from home much and I missed home. I’m from a small town. It just didn’t feel right at the right time.”

VIETNAM AND A DIFFERENT TIME

In the summer of 1974, the military’s image still suffered from the quagmire of Vietnam. Accepting an appointment was not taken lightly. Faires didn’t have a military background, but his free education spurred him. His father had already told him he didn’t plan to pay for his college. His reason for committing remains a universal one.

“It was a much different time,” Faires said. “It wasn’t ‘cool’ to be at West Point in 1974. Almost all of us had long hair. We were the Class of 78, and when they shaved our heads, the barbers weighed 78 pounds of hair. I tutor kids now going to West Point, and their friends and classmates think it is great. It was just a totally different time.”

Faires believes Dantonio was mostly focused on the football without fully considering the military training — and commitment — awaiting him.

A COACHING GENERAL IS BORN

Once Dantonio returned home, he spent a year at a small Ohio college and then joined his brother John to play football at South Carolina. His coaching career began as a graduate assistant at three schools before serving as assistant coach at Akron, Youngstown State, Kansas and his first stint at Michigan State as a defensive backs coach under Nick Saban. Jim Tressel hired him as Ohio State’s defensive coordinator in 2001, and the 2002 Buckeyes won the national title.

A SOFT SPOT FOR WEST POINT

But it wasn’t until just 13 years ago Faires learned how much respect for West Point and Army football has remained with Dantonio all these decades later. He learned it, ironically, on a painful afternoon Dantonio suffered perhaps the most ignominious defeat of his coaching career.

But somehow Army managed a 48-29 victory in what finished as a 2-9 season.

Faires attended the game with a pass from Dantonio on the Cincinnati sideline. He remembers it as a “comedy of errors,” explaining the numerous fluke bounces of the ball that worked against Cincinnati were topped only by strange bounces favoring Army. After the game he approached Dantonio’s wife Becky with trepidation.

“Mark is really, really pissed,” he told her.

“She said, ‘He’ll be OK. If Mark absolutely had to lose a game, it would be this one,’ Faires recalled her responding.

“Don’t get me wrong,” he added. “Mark doesn’t like to lose at anything, but this one likely bothered him the least as he understood what breaking the streak meant for these beleaguered cadets from an institution he admired. It’s tough to hate the guys at Army, Navy and Air Force when you know you all the things they’ve been through.”

Faires says he doesn’t bother his old friend much during football season, so he hasn’t had the opportunity to invite him to attend an Army-Navy Game. But he has no doubt the natural-born leader has a rooting interest in the Black Knights this weekend.

“Deep in his heart he still has a special place for West Point,” he said.

Coach K’s farewell season has no MacArthur fade away