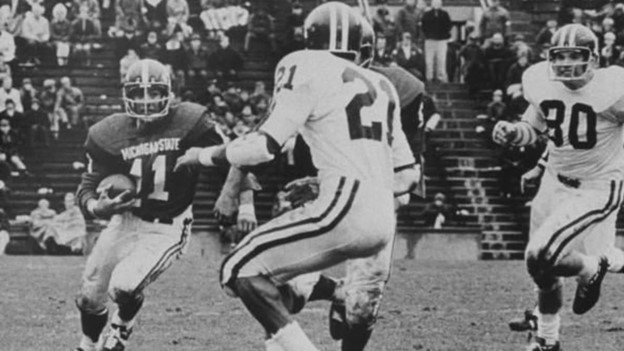 “Spartan Verses” was a book of poems by Michigan State’s Pat Gallinagh, an Academic All-American defensive lineman on the Spartans’ 1965 and 1966 national championship teams.

The Polynesian Football Hall of Fame inducted Charlie Wedemeyer, a three-year Michigan State letterman, 1966-68, on Jan. 21 in his home state of Hawaii.

He was from the Islands, one of Hawaii’s most famous sons

Following in the footsteps of Lopes, Kenney & Apisa, some powerful Spartan guns

Charlie & Lucy would stay together until the day he died

Theirs was a love story for the ages, one to make grown men cry

Even though he was small in stature, he was a perfect fit

For the Green & White of 66 and brother could he hit

In that fabled season, he was part on one incredibly crucial play

Though he was recruited as a quarterback, he always put the team first

When he was moved to wide receiver, he could still pass on the end reverse

He was loved by teammates but by his classmates even more

As he ventured forth in life, he was guided by his character and faith

Once he found his calling, he became a high school football coach

He was destined for greatness but not through the normal approach

He is probably the most inspirational Spartan to have ever lived

He continued coaching even when forced to use a wheelchair

And when a tracheotomy robbed him of his voice, his players didn’t despair

Reading his lips relaying his plays which did this game decide

The Wedemeyer’s  were immortalized in a documentary, books and a TV movie too

What is a Spartan? By Pat Gallinagh

Johnny Green and the NCAA night he met Adolph Rupp