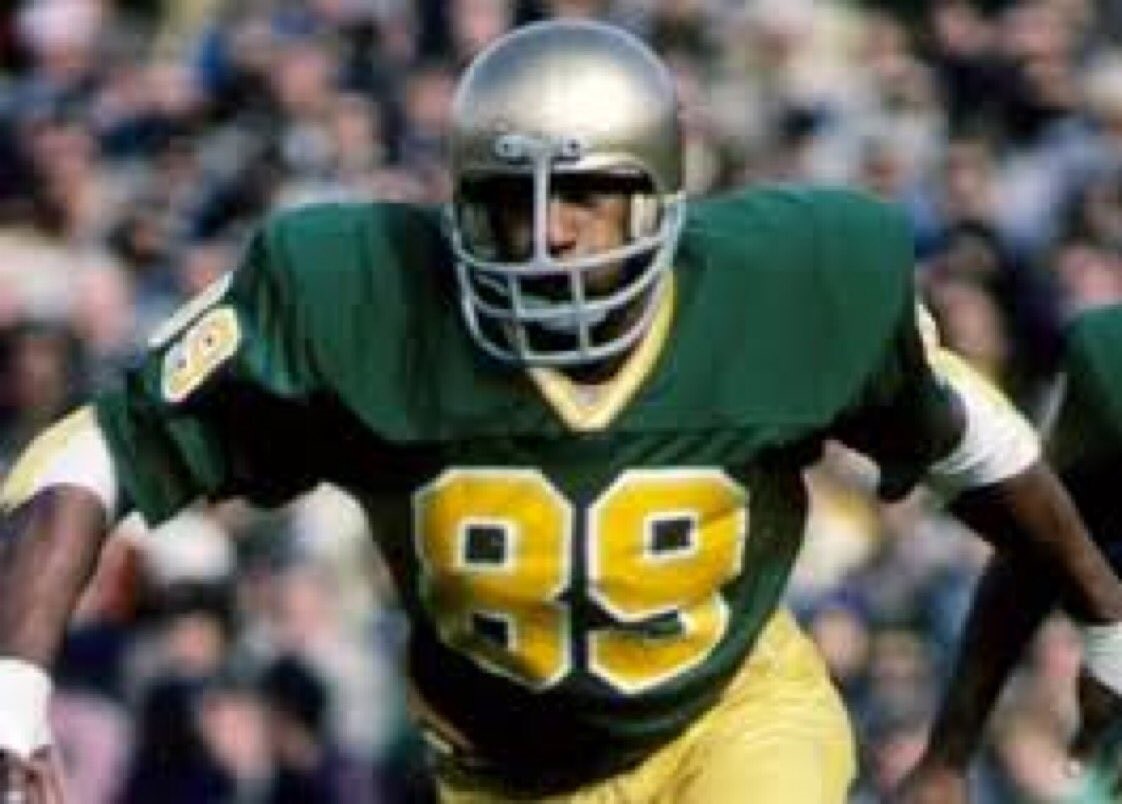 Ross Browner is dead? It can’t be true.

Don’t and tell me Notre Dame’s two-time All-American defensive end, the winner of the Outland Trophy, Lombardi Award and Maxwell Award, died Wednesday at age 67. Don’t try to convince me it was 44 seasons ago Browner and Joe Montana led Notre Dame to the 1977 national title.

In my memory, it was just a few years ago I was a college kid enjoying the ultimate college football weekend with Browner a central figure at a Friday night pep rally. As Jim Murray once wrote in his Los Angeles Times column on his 50th birthday, who is that guy in the mirror looking back at me?

The weekend was Michigan State-Notre Dame on Oct. 1, 1977 at Notre Dame Stadium. The full slice of Notre Dame football was compliments of my colleague Mike Klocke’s high school friend, a Notre Dame student. Mike and I wrote for the State News, Michigan State’s college paper.

We stayed with Mike’s friend at his campus dorm. We toured the campus Friday afternoon. Mike’s friend was a legacy, so his father was in town for the game and bought us a nice dinner. Then we attended the Notre Dame pep rally in the quaint setting of the old basketball fieldhouse.

The band was playing. Streamers were flying through the air. On stage was Browner, microphone in hand, encouraging the fans for the game the next afternoon.

“We know we’ve got the best fans!” Browner said, the fans roaring in response.

“We know we’ve got the best players!” he said next with another cascading roar.

“And we know we’ve got the best coaches!” Silence.

They didn’t boo, but they went silent like flicking a light switch to darkness.

That same sentiment was observed earlier when we walked around campus and passed through the parking lot outside the football offices. Head coach Dan Devine’s name was painted on the curb in black letters with a red X slashed through it.

At the time, Notre Dame was ranked No. 14 in the nation, but it had been since 1973 the Irish won a national title. The fans were restless.

The pep rally and parking lot weren’t the only indications of desperate Notre Dame fans. On a student bulletin board we passed, a Notre Dame student had written in large letters: “Help! Desperate! My rich grandmother needs to two tickets for the USC game, Oct. 22.”

Browner was one of three Notre Dame seniors who were first-round draft picks along with tight end Ken McAfee and Luther Bradley. Michigan State’s first round draft was defensive tackle Larry Bethea, who put together such a dominant season he was named the Big Ten MVP as a defensive lineman on a third-place team behind Ohio State and Michigan. The Spartans had a junior who was on his way to the College Football Hall of Fame, wide receiver Kirk Gibson.

Oh, and Notre Dame also had a backup quarterback drafted in the third round in 1979 who entered the contest midway through the second quarter with the Irish offense sputtering. A fellow named Joe Montana.

Notre Dame fans may be irrational but say this for them: When Montana trotted onto the field to replace Rusty Lisch (who also played in the NFL), the crowd cheered. That was my first glimpse of Montana, but they knew before Devine he was their quarterback.

Montana rallied the Irish to a 16-6 win and took over the starting job. Notre Dame didn’t lose again, routing No. 5 USC 49-19 along the way. USC was the “The Green Jersey” game when the Irish warmed up in their blue jerseys and switched to green in the locker room before returning to the field.

The Irish beat No. 1 Texas in the Cotton Bowl to claim the national title.

On that ultimate football weekend, I also received an early journalism lesson. Sometimes coaches will surprise with you with more than coach speak with a question that turns out to be a trigger. You have to be ready to pivot with follow-up questions. I had a lot to learn.

In those days, postgame interviews weren’t the orchestrated events they are now with the coach and players at a table. You found your subject in the locker room. I looked for Devine, a former Michigan State assistant under Biggie Munn (1950-53) and Duffy Daugherty (1954).

I wanted to ask what he thought of the health of the Michigan State-Notre Dame rivalry. The Spartans had only beaten Notre Dame twice, 1968 and 1975, since the 1966 Game of the Century matching the Irish and Spartans before a record TV audience of 33 million.

In addition to Michigan State’s lack of wins in the past decade, the Spartans were in their second year of a three-year NCAA bowl ban due to infractions under previous coach Denny Stolz.

I found Devine in the back of the locker room with about four other Notre Dame writers around him in a semi-circle. Devine, who had been nursing an ulcer, sipped milk from a coffee cup, grinning, clearly happy with the result.

I asked my question.

Devine went Jekyll and Hyde, launching into a tirade about the Michigan State administration not supporting the football program at the end of Daugherty’s tenure, Stolz as choice to replace Daugherty and Stolz getting the program on probation.

But most of all, what I remember from an ultimate football weekend was Ross Browner and the pep rally. Football can be so much fun and so bizarre. I’ve always told college writers I’ve met while covering a team to enjoy the experience. It will never be quite the same writing for a college paper as it will be in the real world.

How is it possible that was 44 years ago? It seems like yesterday.