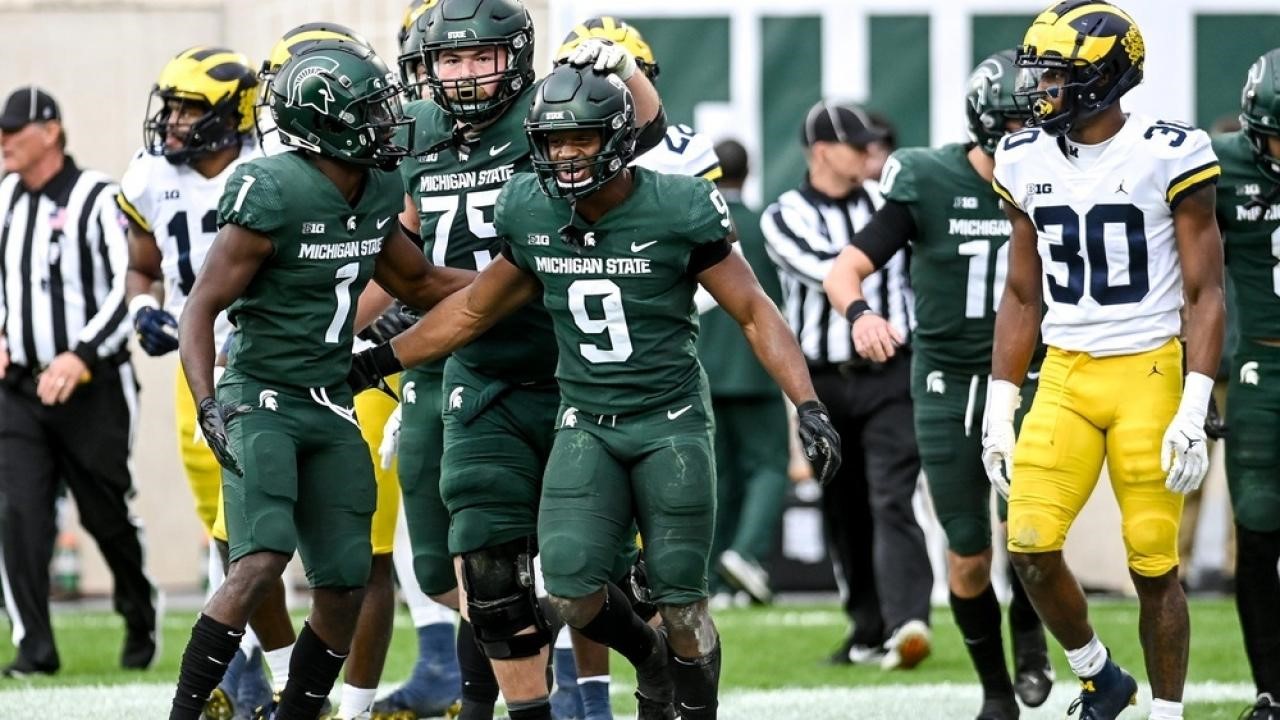 PHOTO: Kenneth Walker III (9) celebrates one of his five touchdowns against Michigan.

One dynamic was the transfer portal permitting immediate eligibility rather than sitting out a year. Players could seek a school they were viewed as a better fit for them and coaches could scan the list for players to fit specific needs.

Another influx was Super Seniors returning with an extra year of NCAA-granted eligibility due to the 2020 COVID-19 pandemic.

But this — the irony of results following Kenneth Walker III leaving Wake Forest for Michigan State? Walker has turned the Big Ten upside down, while Wake Forest kept rolling along, benefitting from 10 transfers and nine Super Seniors to turn the ACC upside down.

What it simply means, is Clawson and Michigan State’s Mel Tucker are two coaches that adapted to changing times sooner than others.

He’s a top Heisman Trophy candidate who strengthened his position leading the Spartans past Michigan 37-33 with 23 carries for 197 yards and five touchdowns on Saturday at Spartan Stadium. He scored on runs of 27, 8, 1, 58 and 23 yards.

“Ken, Kenny Walker, I don’t know what else I can say,” Michigan State coach Mel Tucker said. “This is a huge stage, the whole world’s watching. You got a chance to see what type of player he is, and, obviously, any recognition that he’s getting, Heisman consideration, is well deserved.”

But Walker’s departure from Winston-Salem isn’t a storyline detracting from Wake Forest’s remarkable season. Times have changed. Transfers used to mean the coach or athlete hit a rift that couldn’t be resolved. It’s not necessarily a bitter split anymore.

The Demon Deacons have climbed to No. 9 in USA Today and No. 10 in AP. They are 8-0 for the first time in school history as the only remaining unbeaten ACC team (5-0, ACC Atlantic). The Demon Deacons, picked fifth in the ACC Atlantic, routed Duke 45-7 before a sellout crowd of 31,613 on Saturday at Truist Field.

Redshirt sophomore quarterback Sam Hartman, who reads defenses beyond his experience level, directs a veteran roster with 20 returning starters, nine Super Seniors and 10 transfers that include two from Michigan and one from Stanford. Michigan transfer Christian Turner, Wake’s second-leading rusher, led the team with 10 carries for 75 yards against Duke.

Wake’s season has sparked new passion on campus and in the community. Although Wake Forest is seeking a sixth straight bowl game, Clawson was only 40-45 through his first six seasons of rebuilding the program. The coach who landed this Power 5 job with success at Bowling Green of the Mid-American Conference is now 48-45.

“I want to take a moment to thank our students,” Clawson said. “We had over 4,200 students in attendance tonight. That is the biggest student crowd in the history of Wake Forest football. The students were loud, active and stayed until the end. Tonight felt like we had a home field advantage.

“Our offense continues to play at a high level and I was really proud of our defense. Duke has a very good offense that has averaged 471 yards a game and we played lights out defense in order to slow them down. Tonight, was a great bounce-back effort.”

Wake’s offense relies on a alternating backs, and a year ago Walker was the second-leading rusher behind Christian Beal-Smith, who is the team’s leading rusher again this season with 97 carries for 492 yards and seven TDs.

Walker, though, sought a featured back role when he entered the transfer portal. Michigan State’s anemic rushing game a year ago lacked a back that could carry the team. The 5-foot-10, 210-pound redshirt junior turned out to be a quick fit into the Michigan State locker room as well as the roster.

He earned the starting job in the season opener at Northwestern and took his first carry 75 yards for a touchdown. He finished with 264 yards and four TDs. With Walker’s quick climb to the top of the nation rushing statistics, he has remained level-headed. He didn’t bite on questions after the Michigan game if the performance was his “Heisman Moment.”

“Overall, I don’t feel like it’s a Heisman moment,” he said, “but I feel like it was just a great team win.”

The quickest way to turn voters against you is to claim a Heisman Moment and then come up short against an opponent with a successful game plan to stop you.

Then, when asked about the Michigan-Michigan State rivalry, he used a word appropriately applied to the 2021 football season.

“I believe it was a crazy game,” he said.