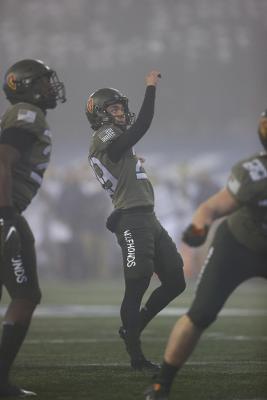 Personal note: About 1960 or so, my namesake uncle was a young U.S. Marine Corps officer stationed in Hawaii. The Honolulu Advertiser used a political cartoon he drew. With this story I wrote on Army place-kicker Quinn Maretzki, the name Tom Shanahan is back in Hawaii’s newspaper.

By TOM SHANAHAN, Special to the Star Advertiser

Many people follow their favorite media personality on cable TV. Mark Maretztki is no different.

“My dad loves listening to Ross Tucker,” chuckled Army place-kicker Quinn Maretzki, a Punahou grad. “He always raves about him.”

Click here for the rest of my story in the Honolulu Star-Advertiser.