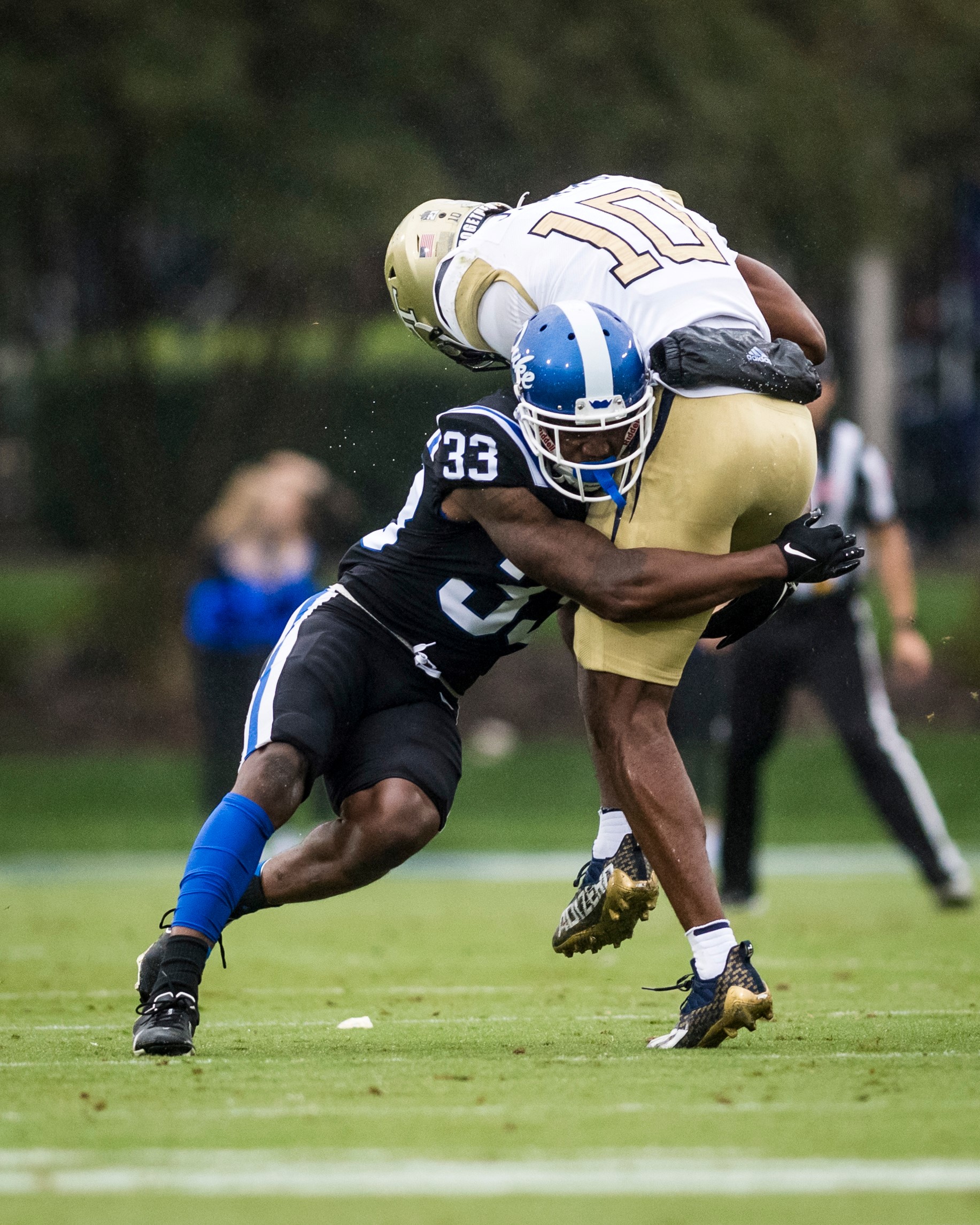 DURHAM – Duke’s Leonard Johnson picked off Georgia Tech quarterback Jeff Sims’ pass just before halftime a month ago. He took off running, spotting nothing but green between him and the end zone.

But a few yards into his sprint down the right sideline he slowed to a hobble. He struggled to keep his balance, finally stepping out of bounds. The redshirt senior starting cornerback’s return covered only 26 yards to the Yellow Jackets’ 34-yard line instead of 60 to the house.

“I got clipped by the receiver they were throwing it to,” Johnson said. “It got me off balance, and I stretched my leg out with a slight injury. I definitely wanted it to be a pick six and definitely felt I was about to have one.”

A turning point to the game was missed with the lost momentum. And maybe the season has also slipped into a downward spiral of a four-game losing streak.

Next up is Pitt, a team seeking to bounce back from an upset loss to Miami at that cost the Panthers their No. 17-national ranking. Pitt (6-2, 3-1 ACC Coastal) and Blue Devils (3-5, 0-4 ACC Coastal) meet at noon Saturday at Wallace Wade Stadium.

At the time of Johnson’s interception against Georgia Tech, Duke trailed 17-14 with 2:06 left in the first half.

Instead of taking a 21-17 lead into the locker room, the Blue Devils came up empty handed. Duke took possession with a first-and-10 at Georgia Tech’s 34-yard line but was unable to gain a first down. On fourth-and-1 from 25, Duke settled for a field attempt from 40 yards. Charlie Ham’s missed.

In the third quarter, Duke left more points on the board while playing from behind. Ham missed a 31-yarder with Georgia Tech leading 24-17.

Duke ultimately lost 31-27 when Georgia Tech scored a touchdown with 51 seconds to play, but the lost momentum after Johnson’s interception appears to be more than the turning point of one game.

Momentum swings on ill-fated turning points in sports happen. In 2015, Duke was about to improve to 7-1 when Miami pulled off a controversial touchdown return with multiple laterals as time expired. The Blue Devils instead lost 30-27 and then dropped four straight games. They finished 8-5 overall.

Pitt presents Duke’s defense with another challenge. Quarterback Kenny Pickett is fifth in the nation, throwing for 344.4 yards a game. He has completed 207-of-299 attempts with 26 touchdowns and three interceptions. He has been ranked with throwing the best deep ball in the country.

Duke, with its lack of a pass rush, has consistently been beaten with deep balls over the secondary.

The players, despite the downward spiral, say the team hasn’t given up. They say their attitude is they have a month more of football to play — Pitt, followed by a road trip to Virginia Tech and home games with Louisville and Miami.

“We’re coming out with the same mentality every game,” Johnson said. “With things not going our way, we’ve got to way to figure how ways to execute and steps things up. We’ve got to get better and figure out a way to beat Pitt.”