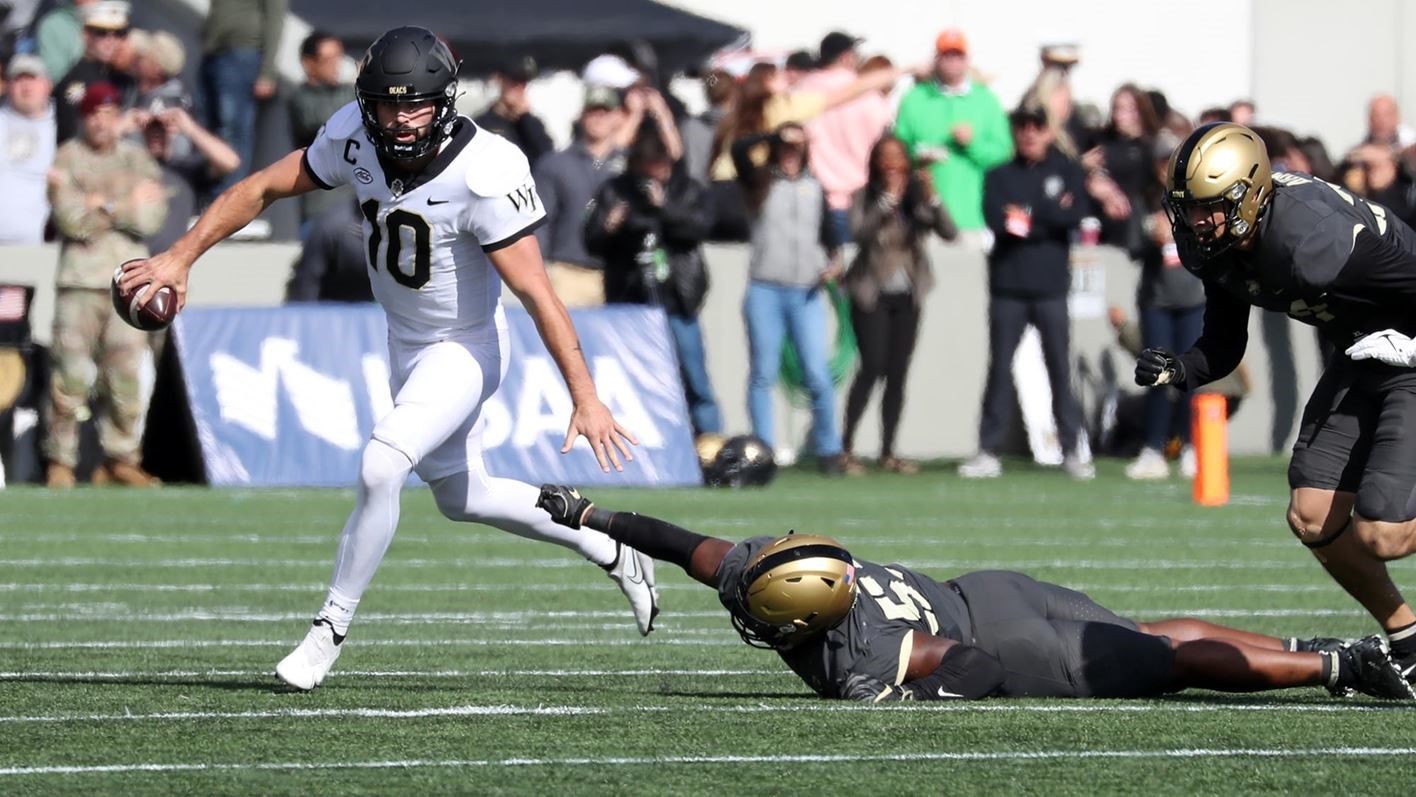 WEST POINT – Wake Forest’s Sam Hartman haunted Army with a Kyler Murray-ish performance. Hartman had to play to that level if the16th-ranked Demon Deacons were to beat the Black Knights.

Army controlled the ball for 42:43, but Hartman maximized the Demon Deacons’ limited possession time of 17:17 to outscore Army 70-56 in a shootout on Saturday before a sellout crowd of 38,000 at Michie Stadium.

“On offense, wow,” Wake Forest coach Dave Clawsen said. “That was about as clean as a performance as I’ve ever seen. And every time we had to make a play, we made a play. Seventy points, no turnovers, 638 yards. We needed every single one of them.”

Playing Murray-ish should be worth some Heisman Trophy votes for Hartman.

Hartman finished the shootout 23-of-29 passing for a career-high 458 yards with five touchdown passes and no interceptions. He connected on TD catch-and-runs of 41, 54, 75, 75 and on a 2-yard toss. Although he doesn’t have Murray’s mobility, he did find running room for an 8-yard score up the middle for a 63-49 lead with 6:57 left in the game.

A gem taken out of the pages of Murray’s Heisman season doesn’t mean Hartman beat the Black Knights with his arm and legs as Murray did in 2018, but think back to the Murray’s 2018 Heisman season. He maximized Oklahoma’s possessions.

Fifth-ranked Oklahoma escaped an Army upset bid with a 28-21 victory in overtime although the Sooners only had the ball 15:19 to Army’s 44:11. Murray threw two touchdown passes and ran 33 yards for third score in regulation and tossed the game-winning TD pass in overtime.

Hartman met that same task while Wake Forest and Army traded touchdowns, but it remains to be seen if Heisman voters, who have a pattern of bias limited to candidates from elite Power 5 programs in the College Football Playoffs, will pay attention to Hartman.

“He knows that offense very well, he did a great job of reading the defense and making the right reads,” Cunningham said. “He took what we were giving them and made a lot of plays.

“We knew what type of player he was and what kind of offense this was. We’ve got to play better as a whole. We didn’t create any turnovers. We didn’t get off the field. Even when he’s hitting those plays, we’ve got to find a way to get the ball back to our offense.”

Wake Forest scored on two of its first three possessions and four of five in the first half. The Demons Deacons scored on six straight second-half possessions until time expired on their seventh possession.

The 126 combined point was a Michie record. Army’s one punt in the fourth quarter was the only punt in the game.

Army started quickly with Christian Anderson returning at quarterback and completing a 39-yard pass on the first play. Army scored five plays later on a 6-yard Brandon Walters run to tie the game at 7-7. Anderson was hurt on a sack in the second series, but backups Tyhier Tyler and Jabari Laws kept the offense clicking the rest of the way.

That was improvement from the Ball State and Wisconsin losses when Army’s offense was inconsistent in the first half.

The game’s 126 combined points was a new high for a game at Michie Stadium. Army’s big numbers including 595 total yards offense and three touchdown passes.

Army has a bye next week before facing Air Force in the Lockheed Commander’s Classic on Nov. 6 in Arlington, Texas. Air Force has already defeated Navy and can clinch the Commander-in-Chief’s Trophy with a win over the Black Knights.

“They will rebound, they will be fine,” Army coach Jeff Monken said. “We have a tough team. They care about each othr. They will be highly motivated for the next game. These CIC (Commander in Chief) games are competitive. Everyone who is competing is highly motivated and excited about these games. It will be a great challenge. We will get our guys geared back up and get back to work tomorrow.”