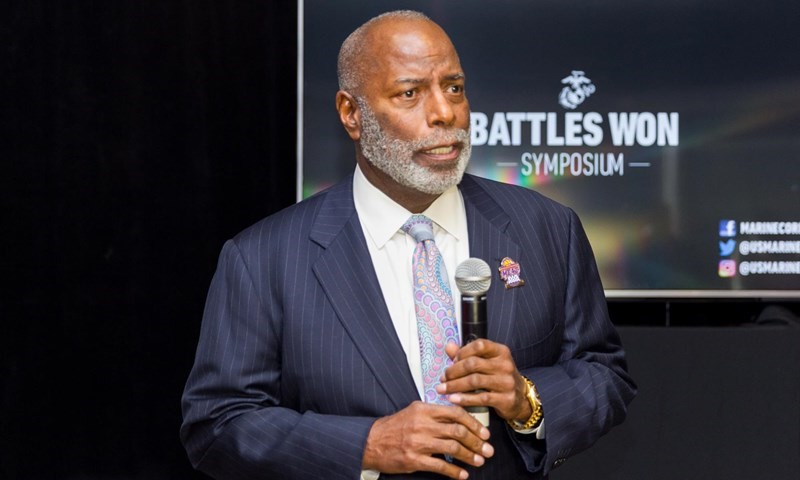 My phone call was placed to Mid-Eastern Athletic Conference commissioner Dr. Dennis Thomas. I wanted to ask him about the significance of Duke football’s decade-plus willingness to share the wealth, scheduling games with HBCU opponents.

Thomas got on the phone. First, though, he said he wanted to discuss another subject.

Uh, oh. Writers don’t like to hear that. My mind began racing.

I had written story for the National Football Foundation on Thomas’ influential career as an HBCU athlete, coach and administrator, but that was four years ago. What had I written recently that raised his eyebrows?

Nothing, it turned out. In fact, it was quite the opposite.

He praised my stories attempting to set the record straight that it was Michigan State coach Duffy Daugherty and his 1960s teams – not Alabama coach Bear Bryant’s mythology — that led college football integration. Daugherty fielded the first fully integrated rosters.

“He didn’t see color. He saw performance. He saw character. He was doing it before it was fashionable.”

Thomas also agrees with me that Bryant mythology has unfairly overshadowed the true 1960s pioneers.

“Obviously, Duffy Daugherty was a very successful coach, but I have more respect for him as a human being,” Thomas said. “He didn’t see color. He saw performance. He saw character. He was doing it before it was fashionable.

“I want to commend you for chronicling and bringing those stories into the public light. I want to tell you how much respect I have for Duffy Daugherty and for you telling the stories.”

It’s frustrating trying to tell a true story overshadowed by the fictional tale of Bryant taking Sam Cunningham into the Alabama locker room to show his players what a “football player looked like.” But more and more I’m coming across opportunities to tell the story and other people who recognize the 1970 USC-Alabama game involves a false narrative.

The Trojan Wire wrote on Thursday about Michigan State having been overlooked, even though USC has benefitted from the fictional tale Bryant brought Sam Cunningham into the Alabama locker room. On Friday, I was a guest on The Drive with Jack.

If you’re wondering what the commissioner of the MEAC, an HBCU league spread out from Delaware to South Carolina, knows about Michigan State, the answer is, plenty.

Thomas grew up in the segregated South, Heidelberg, Mississippi, well aware of Michigan State’s history of recruiting Black southern talent. He was a two-time Black college football All-American offensive lineman in 1972 and 1973 at Alcorn State, an HBCU in Lorman, Mississippi.

Alcorn State was one of the campuses Daugherty used to put on clinics for southern Black high school coaches. The late Hank Bullough, Duffy’s defensive coordinator and later an NFL coach, said one year they spent a week at Alcorn State.

“Duffy told me, if we’re going to be down here putting on clinics, we might as well do some recruiting,” Bullough said.

Bullough explained that was how Duffy’s Daugherty’s Great Northward Football Migration developed. I interviewed him while I researched and wrote, “Raye of Light, Jimmy Raye, Duffy Daugherty, the 1965-66 Michigan State Spartans and the integration of college football.”

However, virtually nothing was written in real time about Daugherty while recruiting 44 Black athletes from the segregated South between 1959 and 1972. In those days, the mainstream media avoided race in sports.

When the southern Black high school coaches arrived at the clinics, they were already aware of Michigan State’s history. They had watched on TV as the Spartans’ Black stars scored touchdowns in the 1954 and 1956 Rose Bowl victories. Now they had met the coach.

And who doesn’t like the jovial Duffy once they have met him?

“Coach Smith knew there were no other Texas (college) coaches putting on clinics in Texas,” Thomas said. “(Texas head coach) Darryl Royal wasn’t doing what Duffy was doing. That was a reason for the pipeline. The Black coaches trusted Duffy.”

Willie Ray Sr. sought out Daugherty after his son Willie Ray Jr. had an unhappy experience at Iowa. He asked Daugherty to take his second son, Charles “Bubba” Smith.

And, while he was at it, both Willie Ray Sr. and Bubba suggested to Daugherty he take Gene Washington, a three-sport talent at a rival Baytown Carver that gave them fits in football, basketball and track and field.

Bubba and Washington, of course, went on to the College Football Hall of Fame. As did Webster and Clinton Jones of Cleveland, Ohio. When Jones joined his teammates in the Hall in 2015, it marked the first time four Black players from the same class were enshrined.

Raye, from Fayetteville, N.C., is in the Michigan State Hall of Fame after a pioneering career as a Black quarterback for the Spartans — the South’s first Black quarterback to win a national title — and as coach in college and the NFL. He was hired by Daugherty, in 1971.

Daugherty also had led the way with Black coaches hiring Sherman Lewis as a coach, in 1969. Lewis, from Louisville, Kentucky, was Daugherty’s first Underground Railroad All-American pick in 1963 when he was third in the Heisman Trophy voting.

Although the mainstream media largely avoided mentioning race, a record TV audience of 33 million saw what was happening when they tuned into watch the 1966 Game of the Century matching Michigan State and Notre Dame on Nov. 19, 1966 at Spartan Stadium.

Michigan State lined up 20 Black players, 11 Black starters, two Black team captains, Webster and Jones, and Raye as one of only two Black starting QBs in the nation.

Notre Dame lined up one Black player on its roster, Alan Page.

In fact, Michigan State had more Black starters from the Houston area — Bubba and safety Jess Phillips from Charlton-Pollard and Washington Baytown Carver – than Notre Dame had Black players, period.

USC was among the schools following an unwritten quota of a half-dozen or so Black athletes. The Trojans had only five Black players on their 1962 national championship team and seven on the 1967 roster that won the national title.

USC was not the model of integration as has been inaccurately portrayed in Bear Bryant mythology. It’s true the Trojans beat Alabama 41-21 on Sept. 12, 1970 at Legion Field in Birmingham, but the impact of the game was embellished in a myth that began to spread in the 1990s.

There was no overnight reaction in the media to the game. That’s evident from reading a 1980 Time magazine cover story reflecting on Bryant’s career. There wasn’t a single word in the 5,100-word opus about the 1970 USC-Alabama game. College football integration was fait accompli by 1970, with 77 percent of the southern schools representing major conference having recruited a Black athlete ahead of Alabama.

Also overlooked in the myth was USC had only five Black starters. The Trojans were shedding the residue of their unwritten quota years. Most of the 18 Black players on the 1970 roster had been recruited in the previous couple of years, including Cunningham, who made his varsity debut as a sophomore in the Alabama game.

The USC-Alabama mythology has been written to gild the images of Bryant dragging his feet on integration in the South and McKay on the unwritten quota. It has been at the expense of the true 1960s pioneers.

“I have great respect for Duffy Daugherty,” Thomas said. “He took a stand for Black athletes when it wasn’t popular.”