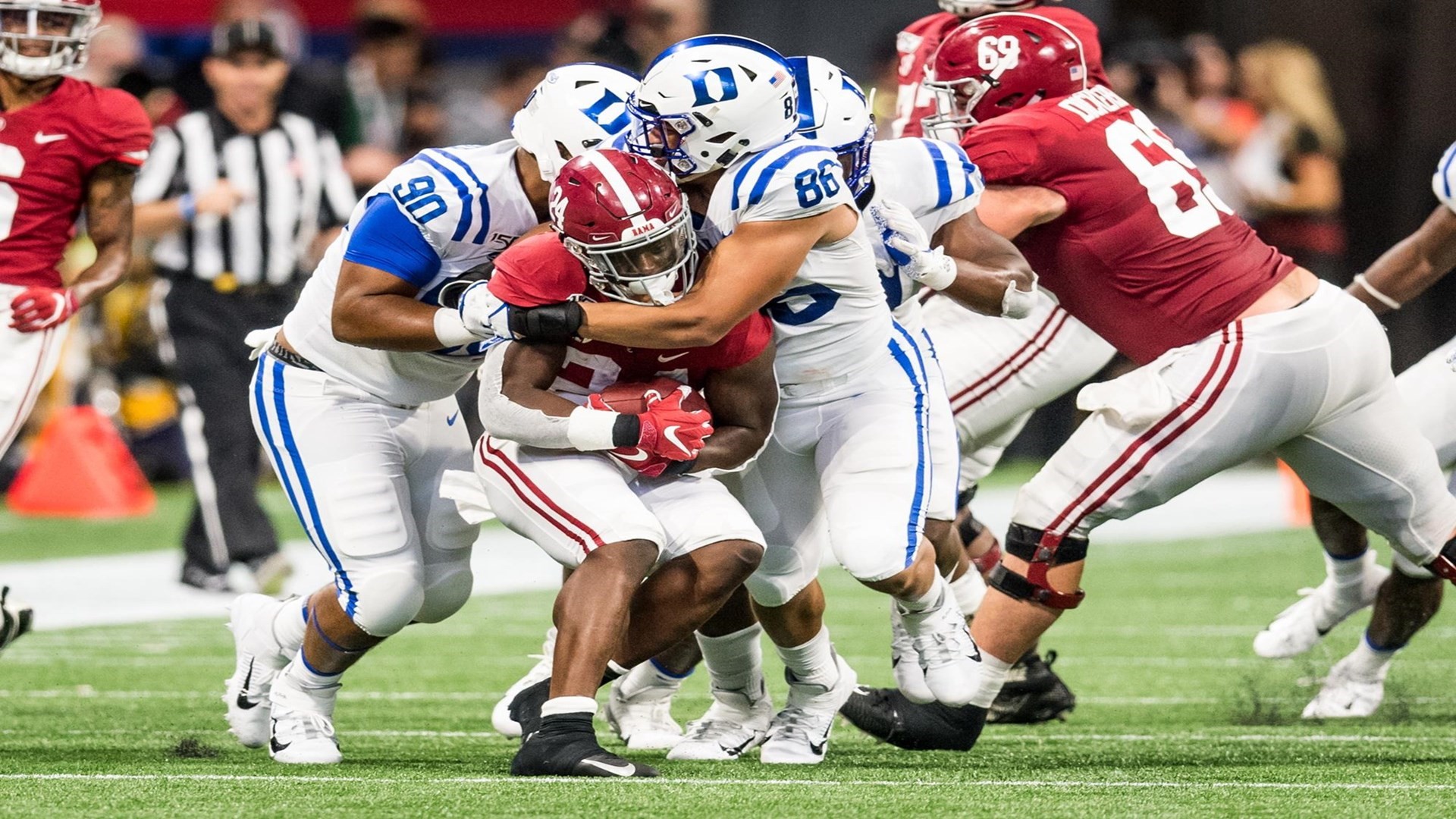 Same with Gunnar Holmberg as one of the three players chosen to represent the Blue Devils’ Wednesday at the Westin Charlotte. He’s the quarterback.

But DeWayne Carter is a redshirt sophomore defensive tackle. How did he get a chair on the stage? He was a backup a year ago and only played 28 snaps in 2019.

“DeWayne has been a great leader for us all the way around,” Durant said. “He’s led a lot of player-led talks. He’s a great person and really great football player. We’ve seen him shine in a lot of games. This year he’s going to get his turn to play a full a game and show how really good he is.”

Carter, a 6-foot-3, 300-pounder out of Pickerington (Ohio) Central, might have been the one most caught off guard head coach David Cutcliffe picked him.

“I was very surprised,” Carter said. “I’m not going to lie to you, I was very surprised. I thought of guys that have a higher profile than I do. I feel like it’s a testament to how they (the coaches) feel about me, how the team feels about me. I’m truly blessed and thankful.”

Carter was a 3-star prospect that was a recruiting coup for the Blue Devils, although the “coup” reference usually refers in recruiting vernacular to 5- and 4-star players. But Carter had 28 offers, including Notre Dame and among Big Ten schools closer to home, Michigan and Michigan State. Cincinnati (9-0), the AAC champion that finished the year ranked No. 9, also offered.

Duke needs Carter to be an anchor in the middle of line as well as a voice. The Blue Devils lost four veterans, Chris Rumph, a fourth-round draft pick by the Chargers; Victor Dimukeje, a sixth-round by the Arizona Cardinals; Drew Jordan, graduate transfer to Michigan State; and Derrick Tangelo, graduate transfer to Penn State.

“I think the biggest challenge that we would face is the loss in the defensive line,” said Cutcliffe. “But we got a lot of young talent. We’ve got more depth than we’ve had at that position. Competition always strengthens a team.

“So, DeWayne and I have talked a lot about that recently. He obviously is a very experienced player. But I’m excited about what they’re going to do. I’m excited about every position we have. Really, I think this team, since we’ve been at Duke, and this is going into year 14, has the most balance and competition at every position. That is always in my past made a football team better.”

Duke’s projected starting lineup by Phil Steele Magazine has junior Ben Frye (6-3, 255) at defensive end, a move from inside a year ago when Rumpf and Dimukeje were on the outside, Frye, undersized at tackle, relied on techniques as a star high school wrestler to finished with 28 tackles, three for a loss and one sack. The other tackle is sophomore Ja’Mion Franklin (6-1, 310), a transfer from Notre Dame, and the other end is redshirt freshman Caleb Oppan (6-4, 235).

“Last year we gave away too many yards,” Carter said. “We missed a lot of tackles. The coaches have been emphasizing tackling and what you’re going to see is a team that flies around. We’re going to have fun. We love the game of football. I feel like that’s a lot of what we missed last year.”

Durant, who faces Carter in practice, thinks Carter measures up for ACC play.

“DeWayne is super strong,” Durant said “He’s strong willed and hard to move and one of the most explosive big guys you’ll see around. He’s really able to move. This day and age you’ve got to have guys that can stop the run and also rush the pass. He fits that mold very well with his size and being able to move as well as he does.”

That’s why he was on stage in Charlotte.