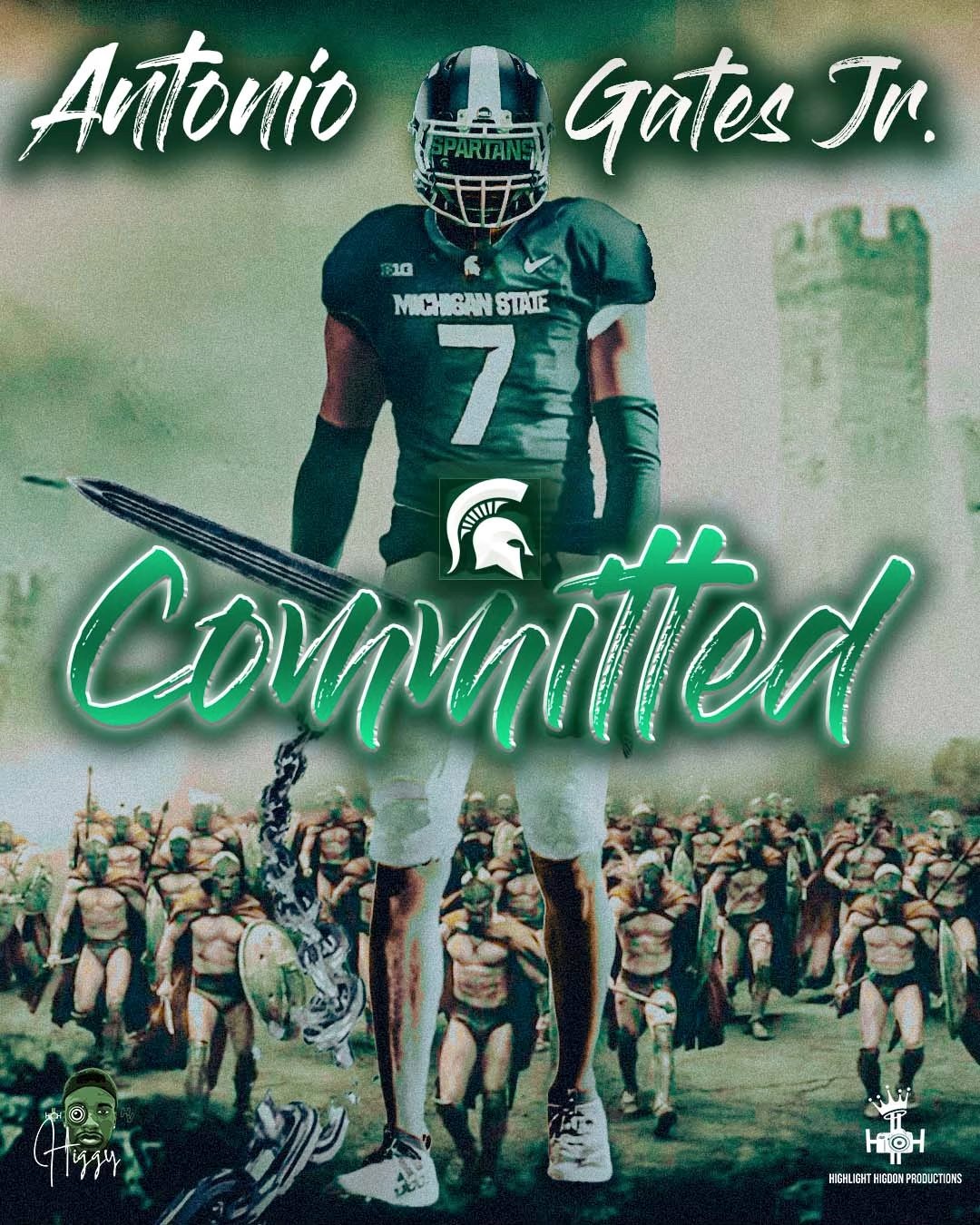 If you were surprised to learn Michigan State gained a legacy commitment from Antonio Gates Jr., you’re excused. His father wasn’t at Michigan State long before he butted heads with Nick Saban.

Gates Sr. committed to the Spartans in Saban’s final recruiting class, 1999. Gates planned to double up in basketball with Tom Izzo. Saban, though, wanted Gates to focus on his grades and his sport with the higher ceiling, football. He saw him as an All-American tight end.

Gates saw himself as an All-American athlete, too, but basketball was his love.

He proved himself correct, leaving Michigan State for a circuitous route that resulted in honorable mention All-American basketball honors at Kent State as a senior. He averaged 20.6 points, 7.7 rebounds and 4.1 assists. As a junior, he nearly led the Golden Flashes to the Final Four before they suffered an Elite Eight loss to Indiana.

But by 2004, as Gates prepared for what turned out to be his first Pro Bowl season with the San Diego Chargers, he admitted Saban was right.

“I should have listened to Saban. If I had, I probably would have been a first-round draft pick. Nick Saban was just trying to show me the right way, but I had my own vision. What he was trying to get across to me made sense as I got older, but back then I was a 17-year-old kid going to college who wanted to play basketball, too.”

Gates finally gave up on his basketball dreams once he came to the sober conclusion the only scouts coming to watch him play basketball his senior season represented NFL teams. He signed with the Chargers as an undrafted free agent, in 2003.

His rookie season, he quickly rose from third-team tight end to starting 11 games. He finished the year catching 24 balls for 389 yards and two touchdowns on a 4-12 team.

By the end of offseason workouts in the early 2004 summer, then-Chargers coach Marty Schotteneheimer liked the growth he’d seen so much, he wasn’t afraid to tell me he predicted a Pro Bowl season.

Schottenheimer, like Saban years earlier, was right. Gates’ made the Pro Bowl team for the first of eight times. He played 16 years before he retired after the 2018 season as Pro Football Hall of Fame candidate.

All those years Antonio Gates spent in basketball positioning himself for rebounds against taller players — they stretched his height at Kent State, listing him at 6-foot-5 — have finally paid off for him at the pro level. Funny thing is, though, not with an NBA opportunity.

When Gates, an honorable mention All-America power forward as a senior, finished his college career after the 2002-03 season, the only pro league that came knocking was the NFL. It didn’t matter to NFL scouts that Gates hadn’t played in a football game since high school.

“Midway through my senior season in college, all these NFL scouts were coming through to watch my basketball games,” Gates said. “I was wondering why they kept showing up. It didn’t matter how well I played. I could score 50 points in a game, and they would still be telling me I looked like I could be a good tight end. I was wondering what I had to do to convince people I was a basketball player.”

Well, all he needed to do was grow taller, according to Arkansas basketball coach Stan Heath, who was Gates’ coach his junior year at Kent State.

“If he was three or four inches taller, he would have had the potential to be an NBA superstar,” Heath said. “He has that kind of athletic ability and skills. He was 250 pounds, but he was as fast as anybody on my team with soft hands and good footwork.”

Gates, his height now listed accurately with the Chargers as a 6-4, 260-pound tight end, is preparing for his second NFL season when Training Camp opens July 30 at the Home Depot Center in Carson.

He has transferred his athleticism from the basketball court to the football field. And one primary reason, he says, is those positioning skills he toiled at for so long are still paying dividends.

Gates, an undrafted rookie free agent, jumped past the practice squad stage that was projected for him. As a rookie he caught 24 passes, third on the team, for 389 yards (16.2) and two touchdowns. He started 11 games, including the final nine.

“He’s now at a point where he has his feet on the ground with regard to football,” Chargers coach Marty Schottenheimer said at the conclusion of Mini Camp and the Offseason Coaching Sessions. “He has been very impressive. If he continues to work hard as he has been, he could have a terrific season.”

Schottenheimer compared Gates’ “terrific size and athletic ability” to John Mackey, the Pro Football Hall-of-Fame tight end who played with the Baltimore Colts (1963-71) and one season with the Chargers (1972). Mackey was one of the first athletic tight ends from the 1960s who redefined the position from blocker to pass-catching playmaker.

But Gates’ stubborn love of basketball almost cost him his NFL future. He went to Michigan State on a football scholarship with plans to also play basketball. He had earned first-team All-State honors in both sports at Detroit Central High School and said he picked Michigan State over Michigan because of a promise to play both sports.

He redshirted his first football season and was preparing for his transition to basketball season, but Gates said then-Spartans coach Nick Saban told him to focus on football and give up his two-sport plans.

“I should have listened to Saban,” Gates says now. “If I had, I probably would have been a first-round draft pick. Nick Saban was just trying to show me the right way, but I had my own vision. What he was trying to get across to me made sense as I got older, but back then I was a 17-year-old kick going to college who wanted to play basketball, too.”

Gates departure from Michigan State began a winding road that took him to Eastern Michigan, to College of Sequoias in California to improve his grades and finally to Kent State. He led the Golden Flashes to back-to-back Mid-American Conference titles, including an NCAA Tournament Elite Eight appearance as a junior in 2001-02. He averaged 20.6 points and 7.7 rebounds as a senior in 2002-03 and was runner-up in conference player-of-the-year balloting.

The NFL teams that showed the most interest, in addition to the Chargers, were the Browns, Colts, Steelers, Lions and 49ers. Gates said he signed with the Chargers because of tight ends coach Tim Brewster.

“I had dealt with guys coming out of high school who weren’t honest with me, and I was looking for a genuine guy,” Gates said. “Tim worked me out, but I wasn’t promised this or that. In fact, he told me I might be on the practice team or I might get cut. He was realistic with me.”

The other important decision Gates had to make was acknowledging his basketball career was over.

“I sat down with close friends of mine, and we talked about how I had to stick with football,” Gates said. “I had to put everything I accomplished in basketball behind me.”

Saban wasn’t the first or last coach to try and convince Gates his future was in football. In fact, when Gates arrived at Kent State in the fall of 2001, Heath encouraged him to play both sports. Heath and then-Kent State football coach Dean Pees, now a New England Patriots assistant, knew Gates well because they both had been Michigan State assistants when the Spartans recruited him.

“We told him we thought he had more potential to go to the next level in football,” Heath said. “He’s a gifted young man blessed with a rare combination of athleticism, size and speed.”

Gates’ basketball skills stand out on the football field when he splits defenders going up for a pass. His hands are high as he plucks the ball and comes down on the run, smoothly looking up field for running room with the same vision he had as a basketball player looking for an open man to push the ball up court.

“In basketball, the ball is the object you’re competing for on a rebound,” Gates said. “That’s kind of similar to catching the football when you’re covered by defenders. Basketball helps me with hand-eye coordination. It also helps me with running routes and giving a little shake and misdirection.”

“I still have a lot more of the game to learn,” he said. “When you get to the NFL, everyone has talent. It comes down to the details of the game. Marty teaches us that’s what separates people. You have to know the right techniques, and that’s what I’m concentrating on as much as possible.”

Heath said Gates was always a player who works on his game rather than just relying on superior athleticism.

“We played him out of position as a power forward, but he understood his deficiencies and went to work to make up for the lack of height,” Heath said. “He would get around people by using his head and quickness.”

Gates improved as his rookie season progressed. He caught career-highs of five passes for 117 yards in the season’s 14th game against Green Bay. A week later he matched his career-high catches with five for 64 yards against Pittsburgh.

Gates’ college basketball odyssey may have cost him a chance to become a first-round draft pick, but he doesn’t express strong regrets.

“You always look back on the mistakes you made when you’re younger and wonder where you would be now,” Gates said. “Maybe I would have been a first-round draft pick if I stayed at Michigan State. But one thing I can say is things are going in the right direction for me now. Everything that has happened to me in my life has me in the position I’m in now and has made me a better person.”

The media and Raye of Light