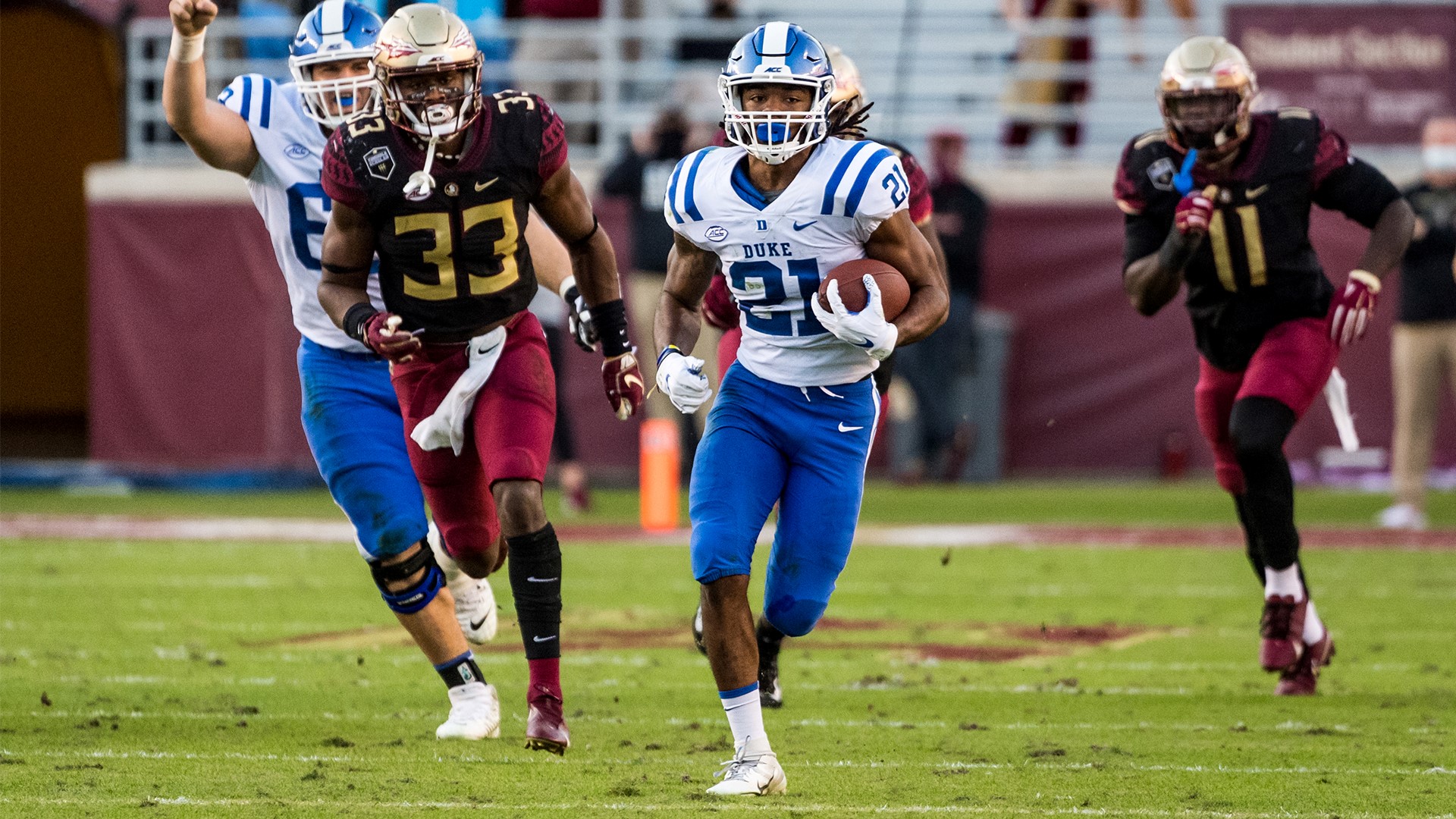 Duke photo: Mataeo breaks away against Florida State on a day he ran for 127 yards.

College football lore loves stories about the kid from a small, rural town making it big. They do it with strength gained from a back-breaking work of load.

This tale will probably never be topped: Bronko Nagurski was discovered in the 1920s while plowing farmland – without a horse. Minnesota coach Clarence Spears was driving by and noticed Nagurski toiling.

Spears later admitted he made the whole thing up, but the legend has lived on.

Duke senior running back Mataeo Durant was discovered the 21st century way – through scouting combines and video highlights — but he did overcome the challenging of emerging from a small town. He’s from Plum Branch, South Carolina, population 87. He attended a school in the smallest enrollment division, meaning he wasn’t facing players as big and fast as him.

Durant admits to spending time fishing with his grandfather, but he otherwise developing his body since his middle years through dedicated workouts and training.

“I wanted to play college football since I went to a Clemson-Auburn game when I was in middle school,” Durant said. “I’m so grateful coach (David) Cutcliffe gave me an opportunity to go to Duke.”

Durant had several Group of Five school offers as well as Duke and two other ACC schools with high academic standards, Georgia Tech and Wake Forest. A small school is not always the beat environment for admission to one the nation’s top academic institutions, but that didn’t slow Durant either.

“My mom is a teacher, so grades were always important,” he said. “I wasn’t going to play without good grades. I graduated from high school with an associate degree.”

Durant was one of the three players Duke brought to the ACC Kickoff media days on Wednesday at the Westin Charlotte Hotel. He takes over the primary running back with the graduation of Deon Jackson.

He has been impressing the coach staff since his first fall camp as a freshman. Although there was a jolt adjusting to the size and speed of Division I college linebackers in his first scrimmage, he adapted to earn playing time as a true freshman.

“My first scrimmage I was going up against guys like Ben Humphries and Joe Giles Harris,” Durant recalled. “That’s when I saw how fast these guys are.”

Last year the 6-foot-1, 195-pounder led the Blue Devils in rushing with 120 carries for 817 yards and eight touchdowns while splitting time with Deon Jackson, who graduated after last season. Durant also a threat out of the backfield, catching 12 balls for 107 yards and a touchdown.

He says eager for the increased workload as the featured back and the expectations that come with it.

“The key is more preparation,” he said. “I still dig into Deon a lot. I call him. I ask him tips on how he prepared for the upcoming season. Now the onus is on me, as one of the oldest backs in the room, to help everyone prepare also.”

Phil Steele Magazine projects the running game as one of Duke’s most improved aspects. Durant said he has confidence in a what has been a young offensive line that has gained experience through the school of hard knocks.

Redshirt senior Center Jack Wohlabaugh (6-4, 305) is back after missing last season with a knee injury in fall camp. He was All-ACC honorable mention in 2019.

“I think the offense will be different,” Durant said. We have Gunnar (Holmberg) at quarterback. He can run and pass. The outside receivers are good and we’ve gotten older on the offensive line. You can’t trade anything for experience. I’ll do anything I can to help the team win.”

Not a bad journey for a guy from Plum Branch, S.C., population 87. It’s off the beaten track, but recruiters are finding it. At least one ACC school has been back to offer Durant’s brother, A’Chean Durant (5-10, 180), a junior running back at McCormick High.

“My little brother already has an offer from Duke,” Durant said. “It’s like the same thing all over again except this time for him. This has been my mom’s dream to see her kids achieve their goals.”