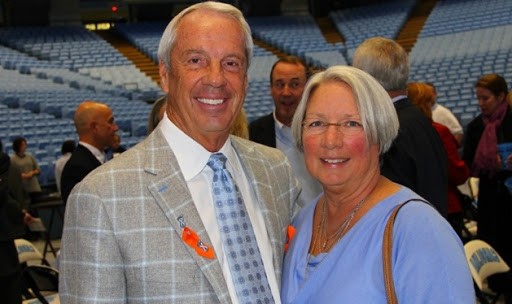 Roy Williams and his wife Wanda.

The Twitter world can move on to another subject. Royal family speculation has longer legs than theories Williams concocted a scheme behind his latest donation to his alma mater.

North Carolina coach Roy Williams didn’t donate $3 million on Monday as his retirement swan song entering the 2021 basketball post-season. Nor was it way to win favor with athletic director Bubba Cunningham to remain coaching the Tar Heels another year.

“Us giving to the university is what we do,” said Williams, referring to his wife, Wanda, in a Tuesday Zoom call advancing the ACC tournament in Greensboro. “I don’t need to buy another year from Bubba. I’m here till 2028. You think I need another year. I’m coaching my butt off! That’s what I’m concerned about.”

Williams said there also was nothing symbolic about kissing the the floor after Saturday’s win over Duke. He said he’s thought about it in the past and regrets having never done at Allen Fieldhouse when he was the head coach at Kansas, 1988-2003.

Twitter jumped to all those above conclusions after North Carolina sent out a release about the donation.

Williams and his wife have made donations in the past anonymously and that was again the case with this $3 million donation. It was made in the fall, but Williams was encouraged by David Routh, vice-chancellor University Development, to make the donation public.

“David Routh in the development office thought it was something that would encourage other people to give,” Williams said. “I’ve already had three calls from people that have decided they’re going to give. What he thought might happened has happened.”

Williams added he heard from Routh that he has taken similar calls.

Williams wife, a former high school teacher, said in UNC’s news release, “The Carolina Covenant is near and dear to our hearts. When Roy came to school here, his mother handed him $100 and said, ‘Have fun.’ If he had been going to school now, he would have been a Carolina Covenant Scholar.”

Williams, 70, whose salary has been listed as $3.9 per year, and his wife have donated $5.8 million over the past 18 years, but his donations also date to back to before he hit the lottery with the explosion of coaching salaries.

He donated $5,000 toward building the Smith Center, named for his mentor, Dean Smith. The Smith Center opened in 1986 when he was still an assistant for Smith at UNC.

Williams remained a Smith assistant until he left for Kansas as head coach, 1988-2003, and then returned to North Carolina as head coach, in 2004. He first arrived in Chapel Hill as a freshman on the JV team, 1968-69, with little money in his pocket. That spurred the donation to Covenant Carolina.

Williams was caught off guard by the misinterpreted Twitter reactions as well as the praise.

“If my wife didn’t have a phone, I wouldn’t know anything about it,” he said. “I think it got carried away.”

North Carolina continues to struggle with inconsistent play and remains unranked, but the Tar Heels have won four of their last six and picked up two votes among others in the USA Today coaches poll. One of the wins was an upset of No. 15-ranked Florida State, the No. 2 ACC seed.

UNC sophomore center Armando Bacot was named third-team All-ACC. He leads the balanced scoring with 11.7 points a game and is second in rebounding at 7.6.

Freshmen Day’Ron Sharpe and Caleb Love made the All-Freshman team and freshmen Kerwin Walton and R.J. Davis the All-Academic team.