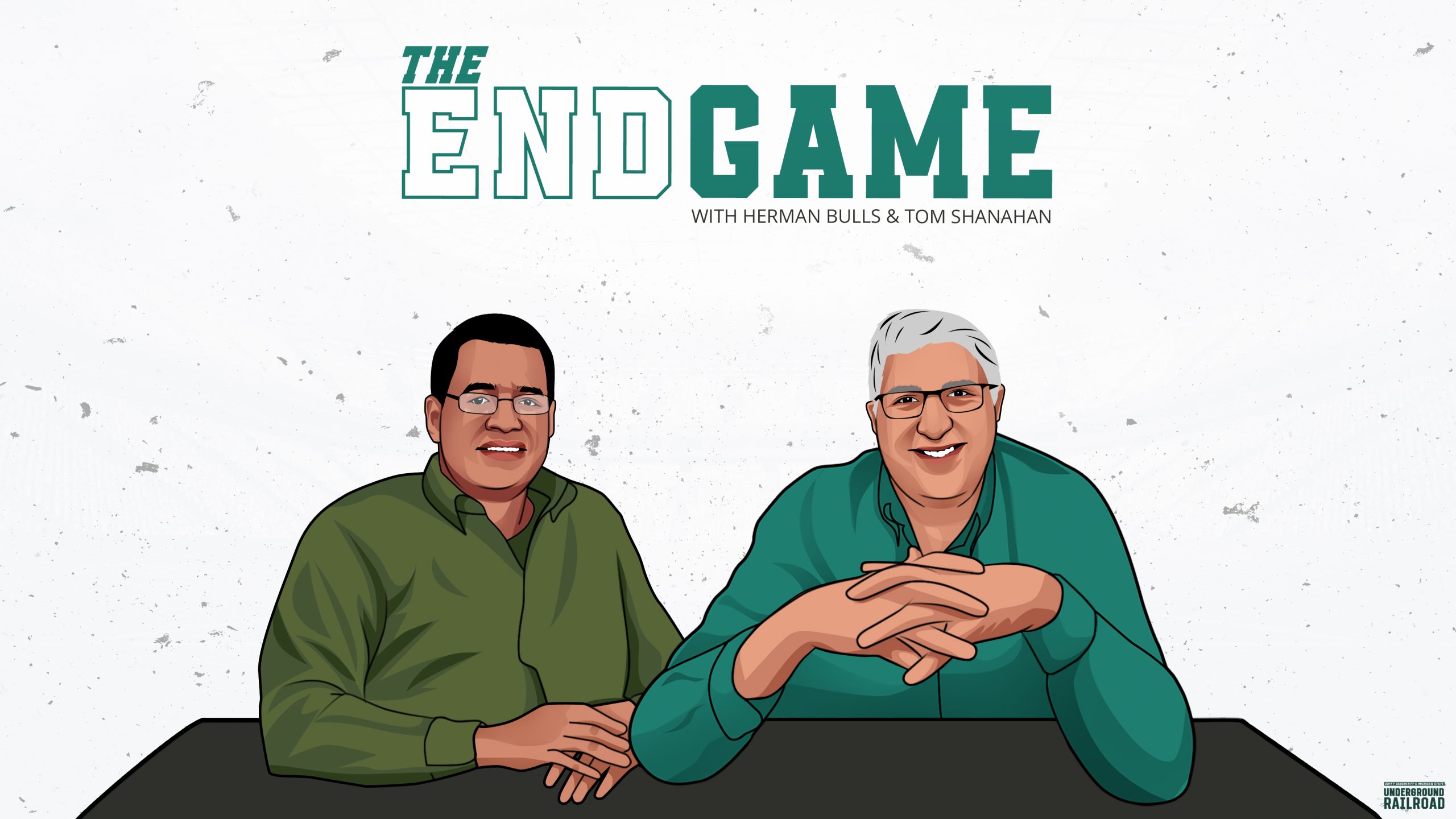 The End Game discusses race and sports in America with a focus on Michigan State coach Duffy’s Daugherty’s 1960 teams leading college football integration. Duffy’s teams were the sport’s first fully integrated rosters and won national titles in 1965 and 1966. Don’t believe the myths and fiction surrounding the 1970 USC-Alabama game that aggrandized USC’s role and obfuscated Alabama coach Bear Bryant dragging his feet into the 1970s. The information is taken from “Raye of Light” and my upcoming book, “The Right Thing to Do.”

Co-hosts: Tom Shanahan is an award-winning sportswriter. Herman Bulls is a West Point graduate, retired U.S. Army Colonel and vice chairman at JLL, an international firm. He has been honored several times as one of top African American executives.

END GAME episodes are prefaced by words of wisdom on race from Ken Burns, the awarding winning historian, writer and producer of documentaries on American culture. For the full conversation with Ken Burns commenting on Michigan State’s pioneering 1960s football teams, click here. The video was taken from an opportunity I had to participate Zoom call with Burns sponsored by the National Sports Media Association.

Clinton Jones was a two-time All-American halfback on the 1965 and 1966 national championship teams. Jones was from Cleveland, and when he informed Ohio State coach Woody Hayes he had committed to the Spartans, Hayes cussed out the teen-ager. Jones also was the No. 2 overall pick of the 1967 NFL draft by the Minnesota Vikings. Read more about Jones and the 1967 NFL draft that changed the face of the league with four Spartans chosen among the first eight picks. Click here.

THE END GAME, EPISODE 8: We discuss veteran college football coach Ruffin McNeill on his rise from cropping tobacco while a youth in segregated North Carolina to an elder statesman. NC State head coach Dave Doeren hired McNeill three years ago as a special assistant to the head coach.

The End Game’s Episode 8 features Ruffin McNeill, a former East Carolina head coach who is one the most respected coaches in his profession. He’s entering his third season serving NC State coach Dave Doeren as a special assistant. In 48-minute videocast with my co-host Herman Bulls, McNeill, 63, discussed his career from growing up as a Black youth cropping tobacco in segregated North Carolina to an elder statesman. He was a long-time assistant coach until his opportunity as a head coach at his alma mater, East Carolina, 2010-15

Read more about Ruffin McNeill, including his disturbing mention of a death threat at Texas Tech, in my story by clicking here.

Anthony and I discuss with Terence his new book on Hank Aaron based on their long relationship. Aaron trusted Moore with his thoughts on many subjects, including the lack of Black baseball players, executives and managers. We also discussed race in sports regarding Jackie Robinson as a Civil Rights leader and the reluctance of Black stars such as Willie Mays, Ernie Banks, Tiger Woods and Michael Jordan to take stances on race. Terence also explains Aaron’s feelings on Barry Bonds and the all-time home run record (we agree the real record is Aaron’s at 755). Bonds’ pursuit of Aaron’s record brought back to Aaron painful memories from death threats associated with his pursuit of Babe Ruth’s record. Naturally, I bring the subject back to Michigan State’s leadership of college football integration at the end of the discussion. I make the correlation between the public failing to understand unwritten quotas in college football through the 1960s and the declining number of Black prospects in baseball.

THE END GAME, EPISODE 6: A conversation with Ken Burns on the importance of telling the story of Michigan State leading college football integration.

THE END GAME, EPISODE 5: Jim Proebstle on the Spartans and his older brother, Dick Proebstle.

Hartnell, a Michigan State graduate, used the book “Raye of Light, Jimmy Raye, Duffy Daugherty, the 1965-66 Michigan State Spartans and the Integration of College Football” as an instructional tool. The students read the book to learn how sports can play a role in the Civil Rights movement.

The four history classes of ninth and 10th graders assembled in a school auditorium on April 26, 2022, for the Zoom call session

Michigan State legacy and KITV4 Island News anchor/reporter Lia Kamana co-hosted with me a discussion on Michigan State coach Duffy Daugherty recruiting Hawaii in the 1950s and 1960s and the enshrinements of Charlie Wedemeyer and Tommy Kaulukukui Sr. in the Polynesian Football Hall of Fame on Jan. 21, 2002, in Hawaii. Our guests were Lucy Wedemeyer (upper left) and Tom Kaulukukui Jr. (lower right). Bob Apisa, college football’s first Samoan All-American player with the Spartans, joined us with an audio link.

Video from the 2022 Polynesian Football Hall of Fame that included Charlie Wedemeyer and Tommy Kaulukukui, Jan. 22, 2022

THE END GAME, EPISODE 2: John Feinstein and his new book, “Raise a Fist, Take a Knee.” This is the best-selling author’s 44th book.

THE END GAME, EPISODE 1: Gary Steele, the first Black football letterman at West Point, is a retired U.S. Army Colonel. For this episode, he is an honorary passenger on Michigan State’s Underground Railroad. He’s a true 1960s pioneer.

Game Changers is a video produced by Michigan State Athletics for MSU Hall of Fame induction of Jimmy Raye, the South’s first Black quarterback to win a national title. Raye, from Fayetteville, N.C., went on to a coaching career as a pioneering Black college and NFL assistant. It is narrated by Pro Football Hall of Fame coach Tony Dungy, who considered Raye a mentor.

Michigan State players from the 1965 and 1966 seasons endorse Alan Haller as athletic director.

The End Game podcasts aim to reflect Martin Luther King’s words, “we have come a long, long way in our struggle to make justice a reality for all men, but we have a long, long way to go before the problem is solved.” The stories will be about Michigan State leading a college football integration a long way, but all of America still has a long way to go. That is especially evident with the lack of Black head coaches and athletic directors in college and head coaches and general managers in the NFL.

Tom Shanahan, a Michigan State graduate, grew up in Big Rapids, Michigan, following the Spartans. He is an award-winning sportswriter and author of “Raye of Light: Jimmy Raye, Duffy Daugherty, the 1965-66 Michigan State Spartans and integration of college football.”

Part II: College football integration lore, in the form of traffic, was steered down a fairytale exit