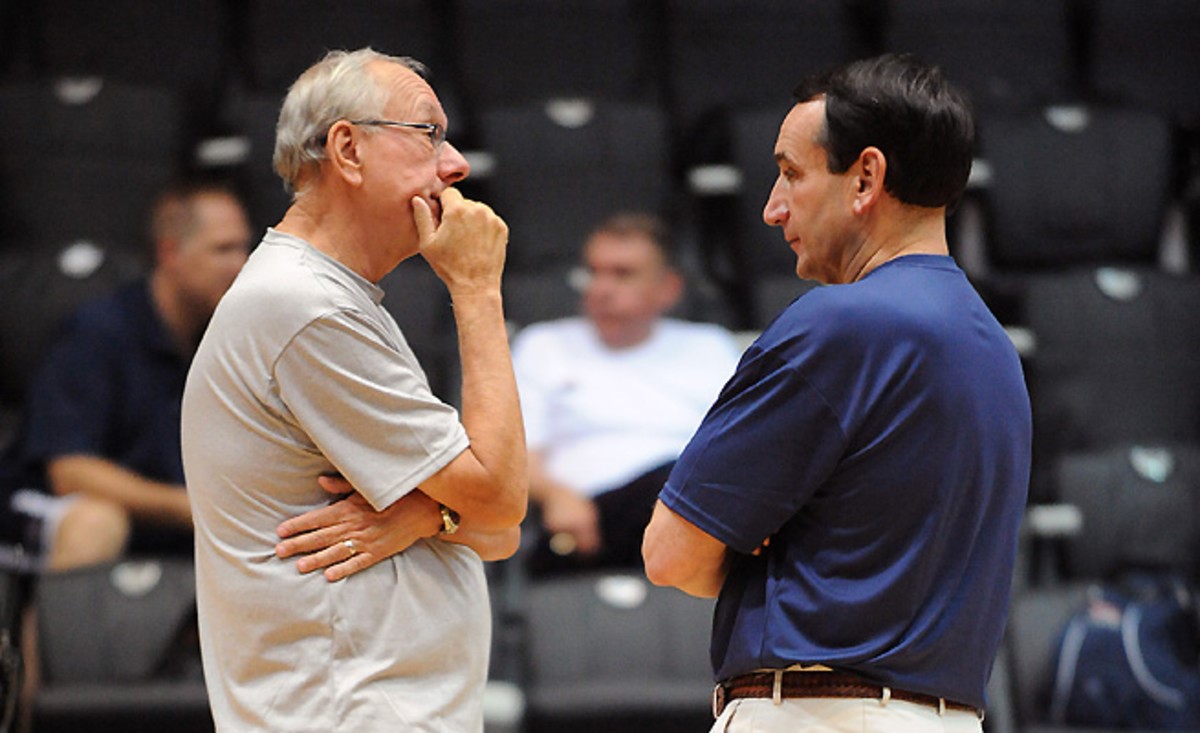 Now we know he doesn’t suffer friends who call him a fool.

Well, at least that was his reaction to criticism that ESPN analyst Jay Bilas offered when quotes from Boeheim criticized Duke freshman Jalen Johnson withdrawing from the team on Feb. 15 with six regular-season games remaining.

Bilas, of course, is a Duke grad that played for Blue Devils coach Mike Krzyzewski. Boeheim and Krzyzewski have a long-standing friendship, including Boeheim serving on Coach K’s USA Basketball Olympic team staffs. Boeheim’s comments, he wanted to clarify, were not only misconstrued, he didn’t want anyone thinking he was speaking for Krzyzewski.

Boeheim, following Syracuse’s 75-67 win on Saturday over Notre Dame, patiently answered all the game questions. Then, before stepping away from the virtual media session, added his own unprompted comments that went only for 12:25. Cuse.com posted the video.

“I’ll close with one thing. I have a talk radio show. I talk about stuff. Nobody listened to it. Now people are taping it, play by play. This is a talk show. What I said the other night about Duke — who we’re going to play (Monday) — had nothing to do with my friendship with Mike Krzyzewski, nothing to do with Jalen Johnson, at all. I watched two games. I said two games. That was a mistake. A half against N.C. State and whole game against Wake Forest.

“What I saw — and (ESPN analyst) Seth Greenberg saw, too — they played the best I’ve seen them play this year. Wake just lost in overtime to Florida State. Duke had them down 30. NC State is a good team, I think. They just beat Pittsburgh. They beat North Carolina. (Duke) crushed them in second half without Jalen. This is not casting aspersions on Jalen Johnson. I haven’t even seen him play this year. He’s a tremendous player. Probably be a great pro. I just made the observation, my opinion, that I thought they played better without him in those two games.

“Jay Bilas is flat wrong if he thinks I said that.”

“Jay Bilas is flat wrong if he thinks I said that. I didn’t. I made an honest evaluation. We’re playing Duke Monday. This (his radio show) is Thursday. I think Duke is playing the best they’ve played. Period. That’s all. I had a headline on Yahoo or someplace, Boeheim attacks Jalen Johnson. I never said one word about Jalen Johnson as a player or as a person or his decision. I just said I thought Duke looked better. That’s all. Maybe they’re not better. I don’t know. But I thought that. That’s it. Nothing else. I don’t know the kid. He’s probably a great kid. Kids can do whatever they want.

“If a kid decides not to play … I can’t remember a kid on a team in the last 10 years that has stopped in the season. If he wants to do that, that’s fine. Players are going to be able to transfer anywhere they want and play right away. I support that. I think it’ll have problems, but I support that. Players are getting their NIL rights. I support that. I think it’ll cause problems but that’s OK. I still support that. I still support Jalen Johnson whatever he wants to do. I just said Duke looked better. To me. That’s it. Nothing against any player. I may be wrong. Maybe they’ll play terrible. But they were good in those two games. End of story.”

By Sunday’s practice, Boeheim had a better idea of how Duke is playing. He had time to watch video of the Blue Devils upsetting No. 7-ranked Virginia 66-65 on Saturday night at Cameron Indoor Stadium, the site of Syracuse-Duke on Monday night.

He would have seen how 7-footer Mark Williams has replaced Johnson in the starting lineup. The freshman has opened up the floor offensively and defensively for Matt Hurt, a 6-10 sophomore. Hurt is averaging 22.7 points the last three games, hitting 24-of-32 field goals (.750) and 14-of-19 (.736) from three-point range. On defense, Williams has taken the burden off Hurt of defending the opponent’s center.

Those elements contributed to Duke’s wins over N.C. State and Wake Forest, but the Blue Devils threw in a new wrinkle off the bench with freshman Jaemyn Brakefield against Virginia. He replaced Williams to better defend Virginia’s Jay Huff, a mobile 7-1 senior.

“Jaemyn made it work because he played so well,” Krzyzewski said. “Huff is a great player. He and (Sam) Hauser are two of the top players in America. Jay is such a good basketball player … his footwork, his touch and his ball handling.

“Mark hasn’t guarded anyone like that. Jay is so unique and Jaemyn was able to move his feet better. We didn’t want to switch every time but when we did, he was able to stay pretty much in front of (Kihei) Clark. Our guards were able to fight off Huff and sometimes bump another big guy there and switch. For our young team, they had to communicate a lot tonight. They made really outstanding decisions on the defensive end of the court.”

“You’ve got to adjust to it on the fly,” Brakefield said of his career-high 29 minutes. “We’ve been preparing the past two days for it, and we knew what we were going to do – we were going to switch one through five on it. So just doing that, everybody had each other’s back and it was easy – it wasn’t easy – but it was easy. We were together. That’s it – together. They preach every day, you’ve got to play harder, play together, and play smarter. And that’s what we did tonight.”