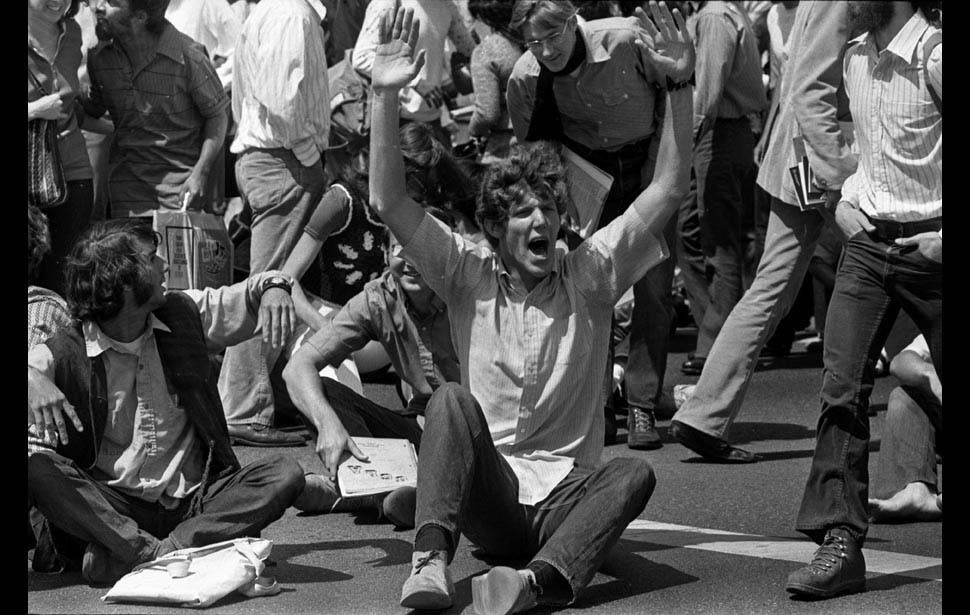 “I’m all for it,” Walton said. “It’s fantastic — a dream come true. It’s what I grew up hoping the future would be; now it’s here.”

What Bob Dylan song might Walton be singing to himself? Maybe, “Blowin’ in the Wind.” How about a Grateful Dead tune? Perhaps, “One Way or Another This Darkness Got to Give.”

Yes, he agreed. Then he added, “There is an endless list of songs” as he mentioned four more: Neil Young’s “Throw Your Hatred Down” and “Southern Man;” John Fogerty’s “Who’ll Stop the Rain;” and Jimmy Cliff’s, “Hard Road to Travel.”

Walton’s hope now is that today’s athletes, men and women, thanks to Title IX, don’t play it safe with the lead, milking the clock. Keep applying pressure, even if it means getting arrested.

“Absolutely,” Walton said. “You have to keep going. You cannot stop.”

The Basketball Hall of Famer and ESPN analyst speaks from experience, having landed in the jailhouse for protesting the Vietnam War as a 19-year-old UCLA sophomore, May 10, 1972.

At the time he was freshly minted as an NCAA champion and the national Player of the Year. UCLA had completed an undefeated season less than two months earlier, defeating Florida State on March 25, 1972 at the Los Angeles Sports Arena.

Walton’s arrest, along with other UCLA students, brought an All-American athlete to the front page, and the Vietnam War to the sports section. He has been the patron saint of college athletes boldly joining student protests ever since.

The 1972 UCLA demonstration had been sparked by President Richard Nixon escalating the Vietnam War. A day earlier he ordered renewed bombing of Hanoi and the mining of Haiphong Harbor.

The students gathered on campus and moved to the Westwood intersection of Wilshire and Veteran.

Those arrested were handcuffed, placed aboard a bus and transported to a jailhouse in the San Fernando Valley. Walton’s picture — seated in the street with his arms peacefully raised, a mop of red hair and dressed in a short-sleeved shirt, jeans and Earth shoes — was splashed across newspapers, magazines and newscasts nationwide.

“Protesting is what gets things done,” he said. “The drive for positive change requires action. The forces of evil don’t just change their ways.”

In June, Walton returned to his hometown, La Mesa, California, a San Diego suburb where he played at Helix High. There was a cleanup following a protest, one of many across the nation prompted by the May 25 death of George Floyd while in Minneapolis police custody.

“Sadly, the challenges still exist,” Walton said. “We hope the world can be better, but we know our history. The study of a sad and significant part of our history reveals selfishness, greed, racism, the caste system and everything that goes into it. It’s not how far we’ve come; it’s how far we still have to go.”

Among the students speaking up coast to coast are Duke basketball player Wendell Moore, who organized a protest in his hometown of Charlotte, N.C. Mississippi State football player Kylin Hill called for the Confederate emblem to be removed from the state flag, prompting the state legislature into quickly voting to do so. In California, the movement trickled down to high school athletes. Elite football prospect Ceyair Wright of Los Angeles Loyola posted a video denouncing police brutality; other top recruits followed with a retweet or like.

— “These Truths, The History of the United States” by Jill Lepore.

— “Between the World and Me” by Ta’Nehisi Coates.

— “Caste, The Origins of our Discontents” by Isabel Wilkerson.

Walton, of course, wasn’t the first college athlete to take a stand, but other athletes’ moments took place away from campus or after their college years.

San Jose State track athletes Tommie Smith and John Carlos made their historic stand at the 1968 Olympics in Mexico City. They accepted their medals for the 200 meters, each raised one black-gloved fist and bowed their heads as “The Star-Spangled Banner” played.

Some Americans weren’t ready to support Black athletes protesting in the 1960s, but by 1972 many had turned against the Vietnam quagmire. The war’s end coincided with an explosion of pro sports money, and a result was athletes turned silent to protect building their brand.

But Walton, rather than viewing himself as a singular moment, considers his protest as joining hands with fellow Bruins.

Jackie Robinson, a UCLA four-sport athlete (1939-1940), was a Civil Rights advocate following his career that broke the Major League Baseball color line in 1947.

UCLA football player Kermit Alexander (1960-62) and eight Black teammates threatened a boycott of the Rose Bowl to be played following the 1961 regular season. It was their response to word Alabama coach Bear Bryant worked behind the scenes to have his segregated football team, ranked No. 1, invited in place of the Big Ten champion for the Jan. 1, 1962 game.

Bryant had attempted to exploit a lapse in the contract between the Big Ten and the Athletic Association of Western Universities (forerunner to the Pac-12). He and his World War II Navy friend, Admiral Tom Hamilton, the AAWI’s commissioner, plotted a smoke-filled backroom deal.

It’s a protest story that deserves a better place in history, but in those days the media generally avoided race in the sports section. Los Angeles Times sports columnist Jim Murray, a Pulitzer Prize winner, was the exception.

When he learned of the Bryant scheme as well as the stance of UCLA’s Black players, he confronted Bryant on a trip to Birmingham before Alabama played Georgia Tech. Bryant offered no comment in Murray’s article, Nov. 20, 1961, “Bedsheets and ’Bama.”

Once Murray’s story exposed the scheme, the Rose Bowl ended speculation that an Alabama invitation was forthcoming.

“UCLA is full of stories like that,” said Walton. “I love that about UCLA. I’m so proud of and grateful for UCLA.”

Murray’s UCLA/Alabama story might be better remembered if not for another controversial yet unrelated development further muddling the Big Ten invitation. Ohio State’s faculty voted 28-25 to decline the Rose Bowl invitation, but that vote took place more than a week after Murray’s trip to Alabama.

Ohio State had clinched the Big Ten with a Nov. 25 win over Michigan, and the Ohio State’s faculty voted later in the week. It feared coach Woody Hayes was turning the university’s reputation from academics to a football factory.

Ohio State’s students responded to the faculty vote with a riot, a starkly ironic contrast with what sparked UCLA to threaten a boycott over a segregated football team.

Wooden, already an icon who Walton revered, had driven to the San Fernando Valley jailhouse to bail out his star. In Walton’s 2016 book, “Back from the Dead,” he recalled their return drive to campus.

Wooden expressed disappointment, telling his star he let everyone down — Wooden himself, his own family, UCLA and UCLA’s family. Walton argued his right and need to protest: “Coach, you can say what you want. It’s my friends and classmates who are coming home in body bags and wheelchairs.”

Wooden suggested Walton express himself through writing letters. So, Walton penned a protest he mailed to Nixon – on Wooden’s UCLA basketball letterhead.

In the 1970s, Walton was viewed as anti-war, anti-corruption, anti-war-profiteering, anti-racist, anti-caste, anti-evil, and a lot of other things.

History has proved him right.

In the 2016 college football season, ESPN invited him to join other sports analysts for “Voices,” a living room setting for their mega-cast, to watch and comment on the College Football Playoff national championship game that Alabama won over Clemson.

Walton proudly dressed as Uncle Sam, top hat and all.

He regularly responds to questions about his storied past with, “Pride is the satisfaction with our choices.”