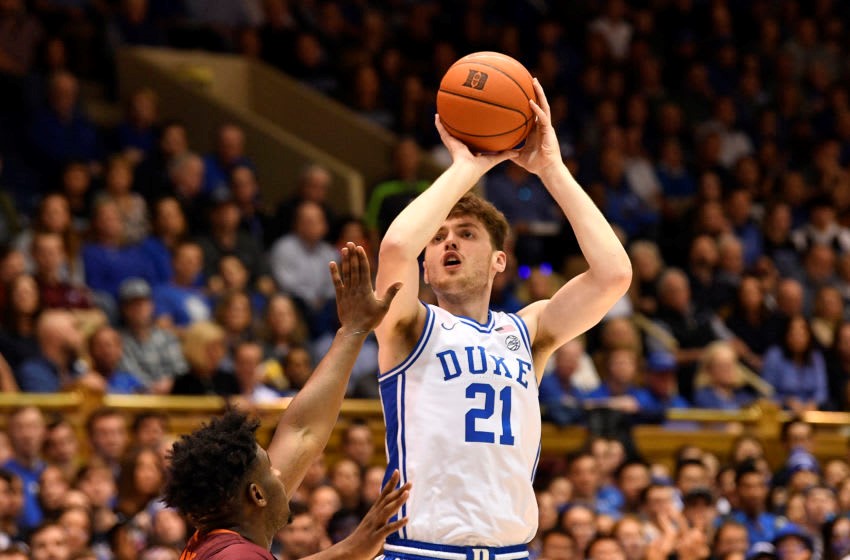 Matthew Hurt played the AAU circuit as a 5-star basketball recruit, meaning he faced plenty of top talent in competition. His play attracted enough offers to have the luxury of narrowing his list to three blue bloods, Duke, Kentucky and Kansas.

His high school days also included starting five of six games for the USA Basketball team that won the FIBA Americas Under-18 Championship.

So, the adjustment he faced as a Duke freshman wasn’t so much about adapting to Division I talent. He saw plenty of it by the time he finished Marshall High in Rochester, Minnesota.

It was about the eye-opener of learning there is a difference in physical maturity between an 18-year-old against more physically mature 22, 21, 20, and even 19-year-old Division I athletes. In football, the difference is why so many true freshmen redshirt their first year.

“I fee like it’s going to have a big impact on my game because the knock on me was I was little lighter,” Hurt said. “Guarding the 4 (power forward), people would try to take advantage of me down low. But I feel like this year, especially on defense but also on offense, just attacking it, being stronger with the ball and taking contact and finishing over defenders.”

Hurt was in and out of the starting lineup largely depending on defensive matchups and rebounding production. He finished the season starting 22 of 31 games, averaging 9.7 points and 3.8 rebounds per game. He was fourth on the team in scoring, fifth in rebounding and sixth in minutes.

He hit 74 percent of his free throws, but he wants to get to the line more than last year’s totals of 40-of-54. It ranked only fifth among the Blue Devils and was less than a quarter of center Vernon Carey (146-of-218).

But to increase his weight and strength was complicated by the COVID-19 pandemic that sent him home to Minnesota from mid-March until returning to campus to rejoin the team on Aug. 2 in their bubble at the Washington Duke Washington Inn. He said it started with a better diet and then a plan devised by strength coach Will Stephens.

Another part of the preseason for Duke has been learning and sticking to safety protocols. Duke’s football team, unlike many other college programs throughout the nation, hasn’t been losing players to COVID-19 infections or tracing.

“We’re just trying to be as safe as possible,” Hurt said. “We’re staying by ourselves as a team. We have an app we sign into every day about how we’re feeling. Our training staff is doing a great job. We’ve all been good. I think if we keep doing what we’re doing will helps us be successful and have a good season.”