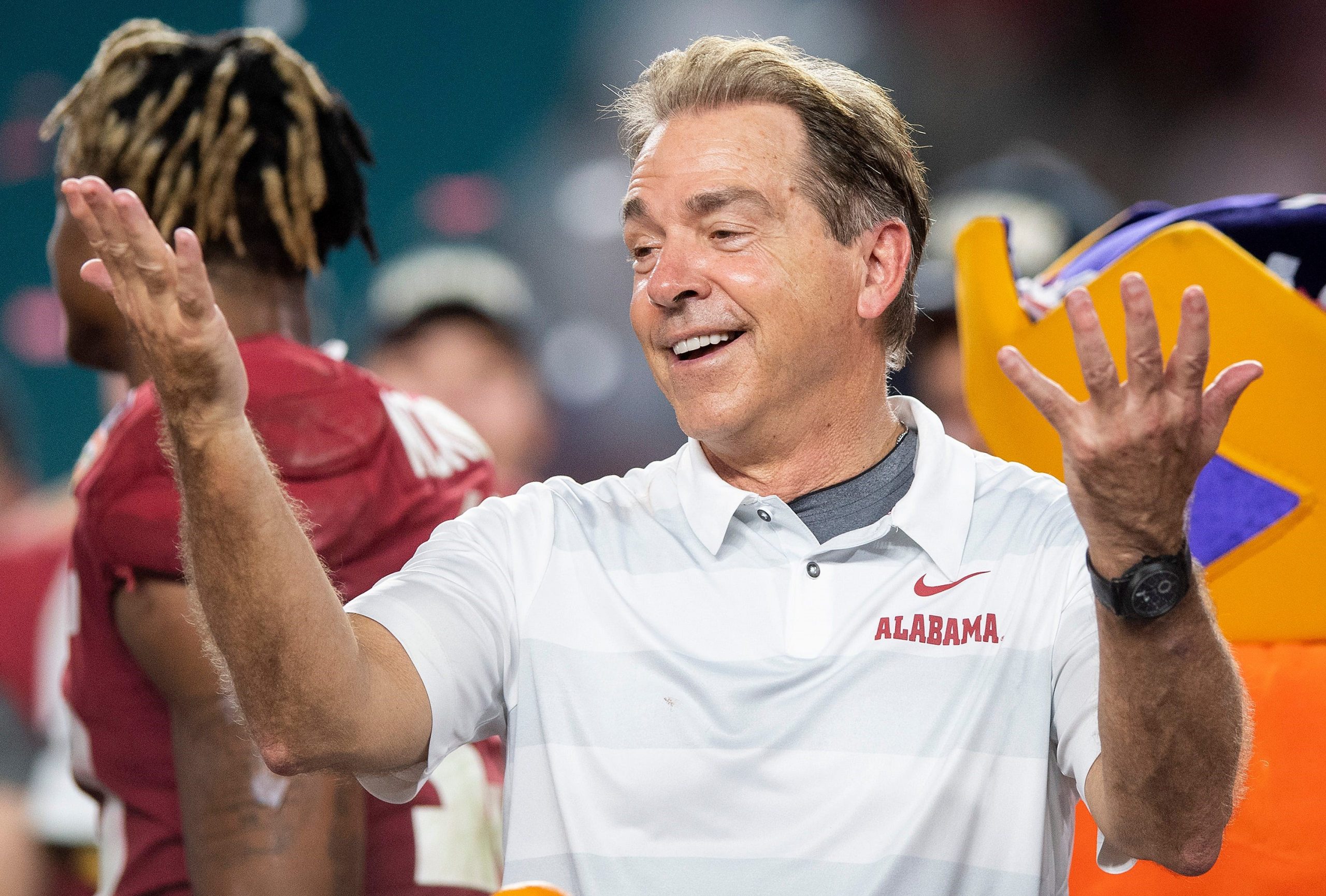 Everybody loved the late Bum Phillips — a Hall-of-Fame quipster and folksy NFL head coach with the Houston Oilers and New Orleans Saints.

“Bryant can take his’n and beat your’n, and then he can turn around and take your’n and beat his’n.”

That was Ol’ Bum, who was a Bryant assistant in 1957 at Texas A&M, although he might have had some inspiration.

The quote has been attributed to others, including Clemson’s Frank Howard during segregation about Florida A&M’s Jake Gaither, a College Football Hall of Fame coach at the Historically Black College and University.

The point is, some coaches could win with or without a recruiting edge. Gaither is one along with Bryant.

Why bring up Bryant’s coaching stature now? He died in 1983 at 69, the same age Alabama coach Nick Saban turns in October.

Of the two major Bryant legacies – one as college football’s greatest coach, the other based on a pretense he led desegregation – the wrong one is challenged each time Saban hoists the national title trophy.

Well, the COVID-19 pandemic has altered the college football landscape. How can we have a legitimate national champion with two of the Power 5 conferences, the Big Ten and Pac-12, playing in the spring and the other three, ACC, Southeastern and Big 12, in the fall.

Or maybe he doesn’t need one more. Even in the South, people have said aloud what was once considered sacrilegious: Nick Saban is college football’s greatest coach.

Who would have guessed anybody could have supplanted Bryant’s stature? In Alabama, Coca-Cola – the sponsor of his highly rated yet poorly produced TV show – paid for billboards with Bryant depicted walking on water.

An old joke about Bryant had Auburn coach Shug Jordan rescuing Bryant from falling overboard while fishing on a lake. Jordan asked Bryant not to tell Auburn’s fans he saved him. Bryant said that was fine with him as long as Jordan didn’t tell Alabama’s fans he couldn’t walk on water.

That was Bryant’s god-like stature.

Oklahoma’s Barry Switzer, who won three national championships (1974, 1975, 1985), has said Bryant and Oklahoma’s Bud Wilkinson were the last two coaches – during the 1950s and the early 1960s — to consistently outcoach opponents with X’s and O’s.

As the game’s popularity grew in the 1960s television age, clinics spread. Wilkinson and Michigan State coach Duffy Daugherty partnered to stage popular “Coach of the Year” clinics across the nation for high school and college coaches. Coaching trees blossomed.

The edge from the 1970s forward, Switzer believes, shifted from X’s and O’s to recruiting — Jimmy’s and Joe’s.

College football recruiting is historically a regional game. Although it became more national in the 1980s and 1990s, not like it is now with the Internet age. The haves and have-nots, in terms of contending for a national title, have greater separation.

Saban clearly knows his X’s and O’s, but what separated his recruiting success from others during the past decade has been I’s and A’s – I-phone and Android smart phones suavely tapped into social media.

The intersection of the Internet, sophisticated recruiting websites and social media has created a funnel sending the top players to the top four or five schools. They are primarily Alabama and Clemson followed by Ohio State and fluctuating other years with another leader, Georgia, LSU or Notre Dame.

For the past decade, many 5-star and 4-star recruits have followed each other, like lemmings, to Tuscaloosa. Quarterback Tua Tagovaoila and his whole family left Hawaii for an Alabama. Talk about an Aloha!

The new age recruits built super teams with their ability to communicate. One national championship begat another top-ranked recruiting class.

Credit Saban, hired before the 2007 season, for assembling the No. 1 recruiting class in 2008, his first full year of recruiting. But thereafter his success had more to do with changing times. Eight of 10 classes were ranked No. 1 by Rivals.com. The outliers were No. 2 and No. 5.

In 13 seasons, Saban has coached two Heisman Trophy winners, Mark Ingram in 2009 and Derrick Henry in 2015 (although there remain mysterious circumstances reminiscent of previous Alabama regimes on how Ingram ended up moving from Flint, Mich., to Tuscaloosa). He has compiled 33 NFL first-round draft picks in 13 Alabama seasons.

Bryant never coached a Heisman winner. He had only 15 first-round picks in 25 Alabama seasons.

In 2019, Saban had seven underclassmen declare for the NFL draft. That’s a record. When Tagovailoa was taken as the fifth pick in the 2020 draft, Saban became the first coach with a first-rounder at every non-specialist position.

Saban’s depth charts have been so deep, Jalen Hurts was a 4-star quarterback that started as a freshman and sophomore before he lost his job to the next 4-star quarterback, Tagovailoa. Hurts transferred to Oklahoma and was a Heisman finalist in 2020.

That’s not to say Bryant didn’t enjoy his own recruiting advantages.

His name alone drew talent. He also had the resources to stockpile recruits just so they wouldn’t play at SEC rivals Auburn, Tennessee, Mississippi or LSU. He started the trend of a building a dorm exclusively for the football players.

The NCAA had to pass scholarship limitations and prohibited exclusive athletic dorms based on the excesses of Bryant and other southern coaches.

But recruiting in Bryant’s era was nowhere near as sophisticated or as coast-to-coast as it has evolved in the Internet age. Bryant’s influence was largely limited to his regional contacts and word-of-mouth. For a talent pool, that’s a lake compared to an ocean.

Not until recently has Saban’s recruiting reign been threatened. Clemson, Georgia and LSU have tapped into a similar formula, along with Ohio State to a lesser degree. The equation includes extravagant and superfluous facilities that also sway some recruits.

Alabama has a water fall in its football building. Clemson miniature golf, a bowling alley, laser tag and a movie theater. LSU has luxury airline sleeping booths for lockers.

Only four have won a national title: Alabama (two), Clemson (two), Ohio State (one) and LSU (one).

Another Bryant edge to consider is his major conference record at other schools over Saban’s.

Bryant won a Southeastern Conference title at Kentucky in 1950, one of only two in the Wildcats’ history, and a Southwest title in 1956 at Texas A&M.

Opinions of Bryant as the greatest coach are backed by facts, his winning record. That justifies his statue at Bryant-Denny Stadium.

Myths about his role knocking down doors with the1970 USC-Alabama game are based on fiction. That’s a confederate statue to tumble.

There is no evidence Bryant purposely invited integrated USC to play in Birmingham — only conjecture from pundits — with a grand plan to lose and thus manipulate bigoted fans into understanding it was time to allow him to recruit black athletes. In reality, Bryant had track record of dragging his feet on integration throughout the 1960s.

But there is grander irony.

Prior to taking the Alabama job, Saban had a losing record as an NFL head coach in two seasons with the Miami Dolphins (15-17, 2005-06). The one NFL job Bryant considered taking was with the Dolphins, in 1970 (the job later went to Don Shula).

If Bryant had followed through on a handshake deal with Dolphins owner Joe Robbie, there never would have been 1970 USC-Alabama game with its myths. Bryant wouldn’t have added three more national titles in the 1970s. He wouldn’t have died considered college football’s greatest coach.

If only Bum Phillips or Jake Gaither were still here to author a quip.

— Book on Michigan State’s leading role in the integration of college football. It explains Duffy Daugherty’s untold pioneering role and debunks myths that steered recognition away from him to Bear Bryant.