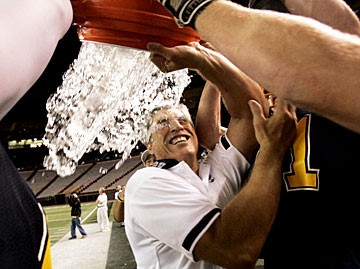 Charles “Kale” Ane knows the look of a Heisman Trophy candidate. He faced enough of them as Michigan State’s starting center from 1972 to 1974 upon legendary coach Duffy Daugherty recruiting him through his famed Hawaiian Pipeline.

Among them were Ohio State running back Archie Griffin, the 1974 Heisman winner that added a bookend Heisman in 1975; Ohio State offensive tackle John Hicks, the 1973 runner-up; and Notre Dame quarterback Tom Clements, the 1974 fourth-place finisher.

Who would think Ane, who also played six NFL seasons, would gain a closer view of two Heisman finalists once he returned to his alma mater as a veteran high school coach at renowned Honolulu Punahou?

Punahou’s Manti Te’o was almost the first Samoan Heisman Trophy winner when the Notre Dame linebacker finished as the runner-up in the voting in 2012.

Marcus Mariota played for Punahou’s rival, St. Louis, before he won the Heisman as Oregon’s quarterback in 2014. Mariota, also a Samoan, unleashed the state’s pent up tsunami celebration as Hawaii’s first Heisman winner as well as first of Samoan or Polynesian heritage.

“When we leave the Islands, we know we’re representing more than ourselves,” said Ane, speaking from experience from his playing career and Hawaiian heritage. “It’s really important how you represent all of us on the Islands.”

And those Hawaiian Heisman finishes have come with national championship game implications. Te’o and Notre Dame later lost to Alabama in a Bowl Championship Series title game, while Oregon faces Ohio State Monday in the culmination of the first College Football Playoff.

Te’o’s national image was smudged when the story of his faux girlfriend’s death came out as a cruel hoax that he fell for naively, but that story has longer legs on the mainland. His preternatural stature was established in Hawaii long before he left for Notre Dame and has withstood the tabloid story.

“He could have started for us in eighth grade, but you’re not allowed to play varsity until you’re a sophomore,” Ane said. “He was a dominant player who transcended situations. Nothing was too big for him. He was a dream to coach, and I know I’ll never coach a kid quite like him again.”

Mariota was a victim of circumstances who thus didn’t start until his senior year.

“We knew about him as a junior and we’re happy he wasn’t starting,” Ane said. “He was a nightmare as a senior; he tore us up. We might find a way to stop him on one play, but he’d come back on the next play. He was the same way then as he is now at Oregon.”

Mariota spent his junior year as a backup to Jeremy Higgins, who was St. Louis’ returning starter and talented enough to earn a scholarship to Utah State (he later transferred home to Hawaii). Higgins also was a legacy QB whose two older brothers had started for St. Louis and went on to play in college at Weber State.

“That was a tough situation for them,” Ane said of the St. Louis coaches. “To be fair, Higgins was a very good player and they were winning. But all the coaches in the league were happy Marcus wasn’t playing.”

It also says something about Mariota’s character that he didn’t transfer to a school where he could start immediately – a common modern-day practice in high school and college football.

However, Mariota’s backup role didn’t escape the attention of Oregon head coach Mark Helfrich, who was then the Ducks offensive coordinator. Helfrich told then-Oregon head coach Chip Kelly to recruit Mariota before the word was out. Mariota committed to Oregon before his senior year.

“They did a great job of evaluating him ahead of other schools in camps and clinics,” Ane said.

Once Mariota committed, another Oregon early commit, the now infamous Johnny Manziel of Kerrville, Tx., de-committed and picked Texas A&M. Ironically, Manziel won the 2012 Heisman over Te’o. And now who has a better image in the NFL – humble yet naive Te’o or lightning rod Manziel?

Mariota was a Heisman favorite as a redshirt sophomore until a knee injury slowed him in the season’s final games. He still finished 245 of 386 (63.5) for 3,665 yards with 31 touchdowns and four interceptions and 715 yards rushing and nine touchdowns. As redshirt junior this season in 14 games, he’s 280 of 408 (68.6) for 4,121 with 40 touchdowns and three interceptions. He’s rushed fewer times following his knee injury, but he’s still a threat with 731 yards and 15 touchdowns.

Note his consistent completion percentages from high school through his college years, including his career high in 2014.

Of the nation’s new view of Hawaiian football prospects, Ane said: “Manti set the standard high. When Marcus came along, there was hope here he could get to that level. I know Manti and Marcus have talked and shared things about pressure and expectations.”

Ane arrived at Michigan State as one of Daugherty’s final Hawaiian Pipeline recruits and played for him one season in 1972 before Daugherty retired. Daugherty was ahead of his time tapping Hawaiian talent, which included Michigan State fullback Bob Apisa as the first Samoan All-American pick in 1965 and 1966 out of Honolulu Farrington.

A half-century ago Apisa spoke of representing his family, Samoans and Hawaii when he left for Michigan State. The only thing that has changed in Hawaii is the Heisman Trophy has shined a light on the Islands.

“Both Manti and Marcus were very humble and dominant players in high school,” Ane said. “They have represented the state and all Samoans and Polynesians with pride and humility. Fa’a Samoa (The Samoan Way) is what they do.”